Hazel Green made a deal with the devil. A disgustingly rich, intelligent, yet highly unethical devil. But does Byron Gogol actually have the ability to cure her sick father Herbert?

That’s what we’re about to find out, as HBO Max’s Made for Love kicks off its sophomore season. (The first two episodes are now available to stream.) When the new run begins, Hazel is giving her dad a tour inside the Hub. He’s well aware that she drugged him, abducted him and placed him inside a replica of his house. But she’s also saving his life, so bygones, etc., right?

Hazel has one more surprise: Byron is bludgeoned and bleeding out on the floor of the other room. The murder weapon: a golf club. Herbert picks up the club, hands it to Hazel and tells her to finish the job. She swings the club down at his head and…

It was all a daydream. Rather, Byron is introducing Hazel to the doctor who will be overseeing her dad’s treatment. The plan is as follows: They’ll sedate him during breakfast. Once he’s unconscious, Bennett will alert the medical team, who will pick him up and transport him to their state of the art medical cube where he’ll get his treatments. When the session is finished, they’ll bring him back home, reset his clocks and he’ll be none the wiser. The treatments won’t be chemo though, so they won’t have to worry about side effects. The Hub does gene editing, cell therapy, nanosurgery and more, and is souped up with all sorts of fancy technological advances.

The duration of the treatment will be 12 weeks. Hazel, of course, tells the doctor that Byron is using her dad’s health to hold her hostage. The second Herbert’s treatment is finished, she’s outta there. Hazel then asks (well, SCREAMS) when she can get the chip out of her head, and Byron confirms they’ll both have theirs taken out. He implanted one in his brain, but never actually activated it. 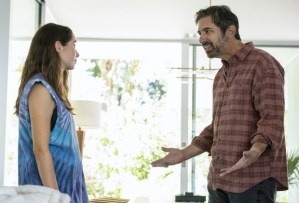 Herbert wakes up with food all over his face, and is surprised that his water tastes so crisp. “It’s like mountain air,” he says.

Meanwhile, FBI Agent Hank Walsh talks to a boardroom of agents, outlining Gogol worker bees who “died” in plants across the country. But he suspects they’re all alive and working in the Hub. Walsh tells Jay that they got him an undercover interview, hoping to nail Gogol for insurance fraud, labor conspiracy, false imprisonment and who knows what else. Plus, he wants him to turn Hazel into an informant. But Jay doesn’t even know where the Hub is. He starts to argue, but says F it. He’s in and his new name is Jasper.

Hazel and Byron get their chips out, and the doctor promises they’ll be incinerated. But Hazel doesn’t trust anyone. She immediately shoves them into her mouth and swallows them. (Well, that’s one way to do it.) She then refuses to get a sensor put in her fingertip, so Byron gifts her with Herringbone’s chopped off digit. Gross, yet effective.

Hazel exits, and she’s right to be suspicious. The doctor and Byron copied the chips using a high-tech transfer plate gadget, and a copy of both of their consciousnesses are then uploaded to a dedicated network. He knew she’d immediately destroy the chips. Always one step ahead, that one.

Herbert calls a garage when his truck’s timing belt fails, only Bennett is the one who fields the call. Looks like continuing to trick Herbert is going to be a full-time gig for all involved. While he’s on the phone, Hazel gets home and sticks the finger in the freezer for safe keeping.

“Jasper” gets interviewed by a Gogol representative and after answering some strange questions, he’s asked to sign non-disclosure agreements and a slew of other papers, but “end of life agreement” catches his ear. In exchange for immortality through Gogol’s virtual biosphere, his former identity must cease to exist.

Herbert makes Hazel look at the toilet, which is swirling faster than ever. “It’s like the plumbing fairy paid us a visit!” he says. He didn’t even have to jiggle the handle! She tells him she fixed it and calls it a happy accident. How long can they possibly keep this charade up? 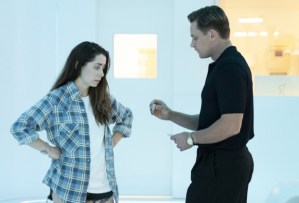 In the middle of the night, Hazel uses the finger to leave her cube. She enters a strange Gogol hallway, and walks toward another area that’s outdoors and looking lush. But she’s denied access. She asks for help, but everyone ignores her, until Byron instructs everyone to interact with her. He says he has to show her something.

They slip through to another cube and wind up on Greg Benson’s childhood roof, where he used to escape to as a kid. No one else at Gogol knows about it but him… and now Hazel. He says it’s hers. He wants her to feel safe and have a place that’s only hers. He promises to never enter the sanctuary ever again, but hopes that one day she’ll invite him in again.

The next morning, Hazel brings her dad breakfast in bed. He’s suspicious that she broke something, but she says she’s just doing a nice thing for him, like he often does for her. He wonders what she’s up to and asks Diane if she’s in on it.

We then see the uploaded versions of Byron and Hazel in an entirely white dreamscape that looks like something out of The Matrix. These beings are entirely naked (but blurred out). They greet each other as “Just the Two of Us” by Lucy Elli plays.

What did you think of Made for Love‘s return? Grade the premiere below, then light up the Comments!