There’s playing with fire, and then there’s… this. In the key art for the sixth and final season of Animal Kingdom that TVLine obtained exclusively from TNT, Shawn Hatosy’s Pope is at once skating on thin ice and skateboarding toward a blaze that looks big enough to incinerate anything it touches.

Were we the betting sort, we’d wager that the poster is a harbinger of doom for the late Smurf’s unstable oldest son. In addition to the whole Cody family’s habit of getting themselves into dangerous scrapes, Season 5 concluded with the police discovering the body of Catherine, the woman Pope loved and was manipulated by Mommie Dearest into murdering. 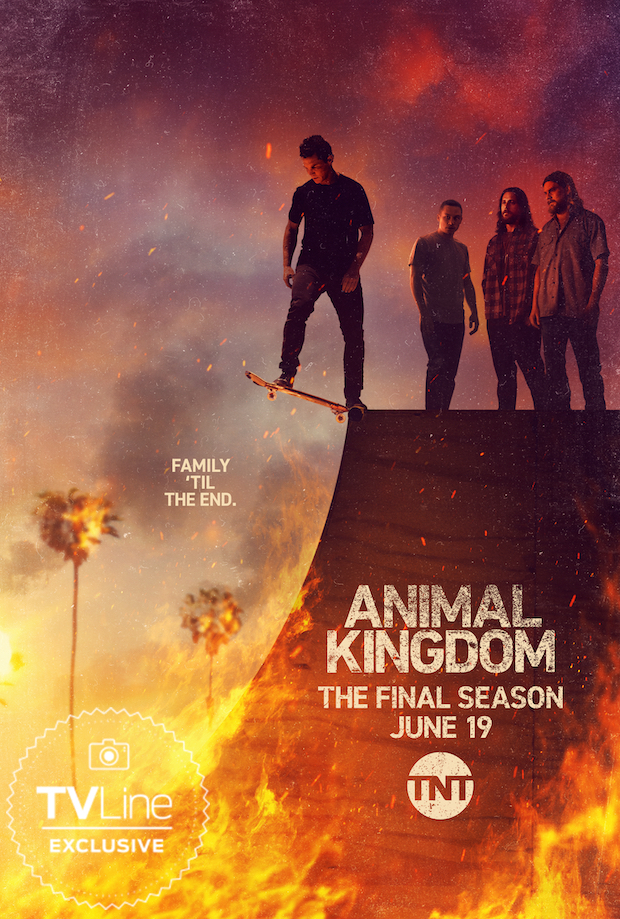 Mind you, it will be something of a shock if any of the Codys are left standing when the closing credits roll on the series finale. You’ll recall that Ellen Barkin was killed off as the thieves’ cutthroat matriarch in Season 4’s penultimate episode. Before that, Season 3’s premiere made a casualty of future Grey’s Anatomy doc Scott Speedman’s surrogate Cody, Baz. “This is Animal Kingdom,” EP John Wells reminded TVLine back in 2019. “We don’t expect anybody to be alive by the time we get to the end!”

Per TNT, in the show’s final season, which kicks off on Sunday, June 19, “the Cody boys discover that they can’t outrun their past. With their empire expanding, a cold-case investigation sets off a series of events that puts the entire family in jeopardy. Revenge, betrayal and a reckoning with long-forgotten violence leads to an explosive conclusion six seasons in the making.”

OK, last call: Of Pope, J, Craig and Deran, which if any of the Codys do you think will survive the final season? Hit the comments with your answers.