It’s a crucial moment for Katie, the assistant district attorney prosecuting the case: Her chances of getting Michelle convicted of involuntary manslaughter seem to have dwindled during the trial, and she’s left to hope that Dr. Breggin will fumble on the stand while she’s questioning him. But for Cash, the scene came with equally high stakes, requiring her to deliver dense paragraphs of dialogue for six straight minutes.

“We spent, I think, six days in the courtroom, so that was definitely a marathon,” Cash recalls to TVLine. “I started making voice memos to myself of some of the longer speeches. I’ll record Breggin’s lines myself with pauses for my lines, and then I’ll record my lines, and then I would just power-walk through Forsyth Park [in Savannah, Ga.], learning them.”

Cash didn’t get an opportunity to meet or speak with the real Rayburn before filming, explaining that “there was, one, no real time, and two, it didn’t seem to be an offer.” (And she understands that second part: “If somebody was making a show about something that had happened to me, I would have a hard time with that, as well.”)

Thus, Cash and the show’s creative team agreed that her take on the then-ADA would be a “fictionalized” interpretation, allowing her some flexibility in her portrayal. She also looked to HBO’s 2019 documentary about the case, I Love You, Now Die, for guidance on how to play the prosecutor. 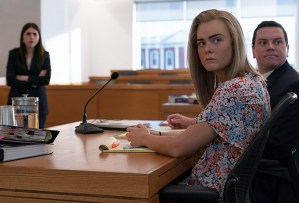 “She’s performing in the documentary. She’s performing in court, which is a different thing from how someone necessarily behaves outside of court,” Cash explains. “I used little bits and pieces of Katie that felt really useful, in terms of how she makes her arguments… And I don’t want my interpretation of our Katie Rayburn to have ramifications for the real Katie Rayburn. This is definitely a character based on some of the things that she brought to the trial.”

Following her cross-examination of Dr. Breggin in Episode 7 — during which he does fumble, and badly, while explaining his diagnosis of “involuntary intoxication” for Michelle — Katie delivers compelling closing remarks to Judge Moniz, urging him to find that Michelle indeed provoked her boyfriend Conrad’s suicide. But even as she accuses the teen of doing so, Cash says her character still has “moments of empathy for Michelle” throughout the case.

“It’s not that Michelle does not need to be held accountable and that her actions [weren’t] horrific, but that humans do horrible things,” she elaborates. “By putting them as two-dimensional characters, we do a disservice to that and actually miss the signs of somebody going down a wrong path… There’s a moment where [Katie] runs into [Michelle] in the bathroom that I think is particularly jarring for her, but she’s also a professional and believes very much in the legal system, and that it is her job and her duty to do this case to the best of her ability.”

To that end, Cash describes Katie as “cautiously optimistic” after giving her closing statements, which is about as victorious as the ADA will let herself feel in the moment.

“She knows that she got the point on Breggin, and I think that was a big point,” Cash tells us. “Both our Katie and the real Katie are extremely smart, and you don’t count your [chickens] until they’ve hatched.” (With reporting by Kimberly Roots)