The following contains spoilers from the April 25 episode of NBC’s The Endgame.

Things… are not looking good for The Endgame‘s Elena Federova (played by Morena Baccarin), who in the penultimate Season 1 episode of the NBC drama found herself buried alive (!) by some members of shady President Wright’s equally shady Secret Service detail.

POTUS (played by Sasha Roiz) had ordered Elena’s unceremonious sendoff when he thought that she had pointed his team to the correct location of the matryoshka (Russian nesting) doll that contains evidence of his years-ago role in the sidelining of a White House challenger.

Elena, though, led Wright to the wrong seized bank, all while Agent Val Turner (Ryan Michelle Bathe) zeroed in on the correct one — where Federova’s henchmen were ready and happy to turn over the damning doll. Inside, Turner and Agent Flowers (Jordan Johnson-Hinds) found a thumbdrive containing video of Wright setting in motion the car accident that tragically killed his political rival’s husband.

Heading into next Monday’s finale, which is titled “Happily Ever After,” Turner now is intent on tracking down the gold that was stolen from the Federal Reserve Bank (which viewers know has been converted into the buttons that Sergey & Co. have been stamping all season long!), wholly unaware that Federova is buried in the woods somewhere, in a pine casket, armed with only a small flashlight that she pinched from a Secret Service goon.

Is there any possible “happily ever after” for The Endgame‘s “Snow White?” (Short of a Prince Charming showing up to save her with true love’s kiss?) To look at our exclusive first photo from the season finale, the answer appears to be… maybe?

Check out the photo, then scroll down for more: 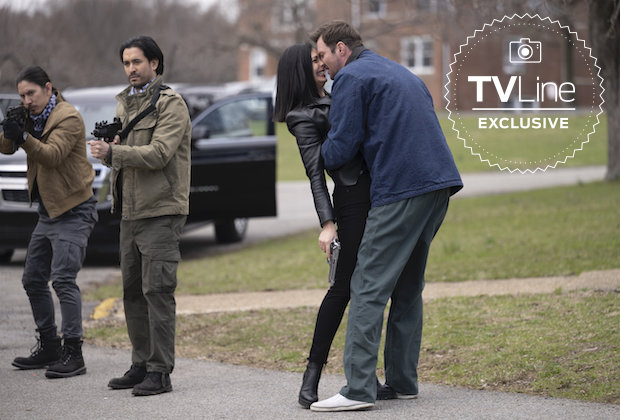 According to the official synopsis for the May 2 finale, “An escape plan goes haywire and old foes face off, while Val learns a secret about Owen.” Showrunner Nick Wootton, in turn, tells TVLine that in the season finale, “lovers are reunited and torn apart, loyalty is betrayed and bargained, and power is exposed for the matryoshka doll it is.”

What do you make of the photo above? What sequence of events possibly leads to Elena’s apparent rescue? And is the moment shown above even really a “happy ending,” or is Agent Turner destined to give her frenemy’s story a twist ending?