The half human-half Vulcan and his signature forehead drapes are set to star in the upcoming Paramount+ series, which premieres Thursday, May 5.

Spock’s bangs are a defining look for the beloved science officer, and the show’s creative team took great care in determining how they would honor that in the show. According to Peck, who plays Spock, settling on the final result required plenty of conversations over length, style and cut.

“There was a lot of deliberation over how they should look [and] how long they should be, and that was largely decided by our hair and makeup team with some input from me,” Peck tells TVLine. “Mostly, I think it was like: What’s the impression that we have of the original Spock? Let’s not copy it because I can’t really be Leonard Nimoy. I’m not Leonard Nimoy.”

Instead, the discussions focused on asking: “What does Spock feel like on Ethan Peck?” 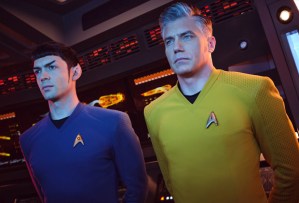 Peck’s version of Spock first appeared in Season 2 of Star Trek: Discovery as Michael Burnham’s adoptive brother. Given everything he went through that season, including the Red Angel mystery nearly breaking his brain and losing his sister when she disappeared through a wormhole, Peck says the Spock we meet in Strange New Worlds is more fragile.

“He had a lot of certainty before his experience with the Red Angel, and before the loss of his sister to time. At this point in time, he’s not so certain, and he’s deeply searching,” Peck explains. “I think Spock inherently is a deeply searching figure, especially at this point in his life. He’s experimenting with how human to be, how Vulcan to be, and not having that many touchstones for either. He’s out of touch.”

While Spock isn’t quite exiled from his home world, he’s “been out from his family and from his father’s line. Michael Burnham was a great teacher for him as a human, as a figure of integrity and as a leader. She taught him so much, but now she’s gone.” In her absence, Spock will search for what is human in Captain Pike (Anson Mount).

The series will also touch on Spock’s romantic side through his betrothal to T’Pring (Gia Sandhu), to whom he’s been connected since childhood. For Peck, it was “really kind of scary exploring that because there wasn’t much of a blueprint for that.”

“We’ve seen a little bit of romance in Spock’s life, but not to the level that we explore in Strange New Worlds,” he shares. “There was lot of dialogue over what’s appropriate and what’s Vulcan enough and what’s too human. It’s just a lot of experimentation.”

Spock might know his way around the bridge, but he’s still a bit clueless when it comes to his romantic relationship. “He’s just kind of figuring it out as he goes along because he’s been so ashamed of his human half for such a long period of his life,” Peck notes. “I think becoming a part of Starfleet and being formally rejected by his father and from his family on Vulcan, he has to explore his human side. It is who he is. This romantic part of him is part of that exploration and that discovery.”

How are you feeling about Spock’s bangs in Star Trek: Strange New Worlds? And are you looking forward to seeing a different side to the character? Drop a comment below.