There are two important things to know while watching HBO’s new limited series We Own This City.

One: Jon Bernthal is mesmerizing as the duplicitous Sgt. Wayne Jenkins. And two: The scenes where Jenkins isn’t the focus are slow and tedious. This is to be expected in the inaugural installment, which premiered Monday on HBO, because the table has to be set. Thankfully, as the characters are established and the mostly true story unfolds, the real Jenkins is revealed, and so is how he eventually got busted.

In a post-Freddie Gray Baltimore, Bernthal’s Jenkins was shown giving a rousing speech on why brutality is the antithesis of solid police work. The Gun Trace Task Force boss passionately argued that in order to get information out of suspects, they had to talk to them, not beat them in the head. Jenkins even joked that he understood the motivation to rough up mouthy perpetrators, but then explained that an officer’s inability to rein in his or her anger would only land them in court.

A couple scenes later, Jenkins was shown talking calmly to a house full of illegal gun owners as he and his officers arrested them, seized their firearms and stole their money. While the actual theft wasn’t filmed, it’s not hard to figure out that Jenkins was dirty and so was his squad. A younger Jenkins was shown breaking a liquor bottle in one man’s hand because public drinking is illegal. Still, there was a better way to do it, and Jenkins could’ve just written a ticket, had he not chosen brutality. 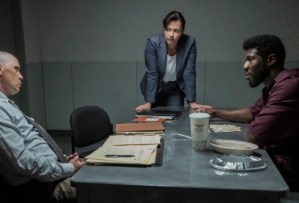 As the limited-series opener proved, the top cop’s sticky fingers were worse then his closed fists. What he didn’t personally nab, his guys did for him. This is why the FBI was shown interrogating one of his most prolific underlings, Detective Momodu “G-Money” Gondo (played by McKinley Belcher III). In one case, Gondo used a police tracker to figure out when a drug dealer wouldn’t be home so he and his crew could rob the drug dealer blind.

Meanwhile, Detective Daniel Hersl (an all-too-convincing Josh Charles) beat up and harassed innocent citizens at will and couldn’t seem to get fired, no matter how many complaints were filed. Nicole Steele (Lovecraft Country‘s Wunmi Mosaku) is the Department of Justice attorney who works to take down Hersl within the Gun Trace Task Force, and Detective David McDougall (David Corenswet) is the county cop who starts to connect the dots on Jenkins’ dirty dealings. In case you’re wondering, McDougall is based on a real detective of the same name, but Steele is a character amalgamation. 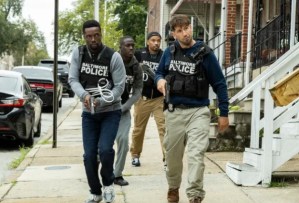 We Own This City, an adaptation of former Baltimore Sun reporter Justin Fenton’s nonfiction book of the same name, is not only packed with characters, but its timeline jumps around a lot. One moment takes place in 2015, and then the narrative leaps two years ahead. Despite all of this, The Wire‘s David Simon and George Pelecanos have created a miniseries that is as fascinating as it is disheartening.

There are even moments of triumph, if for no other reason than we saw Jenkins get arrested by the end of the first installment. But as then-Baltimore Police Commissioner Kevin Davis (the always welcomed Delaney Williams) pointed out, it’s not that Jenkins got arrested, it’s the cocky way he reacted afterward that confirmed his guilt.

What do you think of We Own This City so far? Will you keep watching? Grade the premiere in our poll, and drop your thoughts in the comments.