In the penultimate episode of Pamela Adlon’s Better Things, two members of Sam’s inner circle exited her life… maybe not forever, but for now. With daughter Max and mom Phil now living in England, how was Sam coping with their absence, and where did the FX comedy’s series finale leave Adlon’s whip-smart realist? Read on for a full recap of “We Are Not Alone.”

After taking a short trip to her childhood home, a knock on the door interrupts Sam’s latest cooking sesh. It’s her sister-in-law, Caroline, who says that it’s “absolute torture” to be around Phil since the old woman reminds her so much of her own mother. She knows she got her less-than-favorable qualities from her mom, and confesses that she’d rather be like Sam, “hanging out” and “making everyone feel comfortable.” They compare war stories about their “mean moms,” then Caroline gifts Sam with a new piece of art for her landing spot. (RIP, BEANIE BOY.) “You are the essence of this family,” Caroline tells her. “You keep it going.” The women hug it out and apologize to each other for any past negativity (though Sam does, once again, pronounce her name wrong).

Later, the family is preparing to host a wedding — Sunny and Jeff have decided to get remarried (despite Sunny’s sister trying to talk her out of it). As “the village” (as Sam likes to call her inner circle) arrives, Sam begins her opening remarks for the nuptials. After going on a tangent about life’s strange roads and how the meanest thing that could ever happen to you is that “your kids grow up,” Jeff interjects to get her back on track. After the husband-to-be promises to remember Sunny’s special days and to take beautiful photos of her when she isn’t looking, Sam asks Sunny to promise to always keep her own sun shining (and to maybe forget about the couple’s previous 21 years — Sam’s got jokes!). 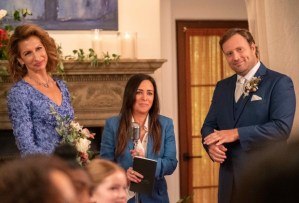 During the reception, we get last quips from Lala (Judy Reyes), Lenny (Cree Summer) Rich (Diedrich Bader) and Chaya (Judy Gold), before every host’s worst nightmare occurs: the power goes out. Sam heads to find her generator with Duke and bashes her knee into a rock. After the genny kicks on, Duke tells her mom: “You’re nice. You’re a really good person. You have a way of bringing people together and making people feel good. And, I don’t know, I like it. I like you. I like the way you live your life.” She pauses. “I’ve got to take a s–t.” OK!

We eventually catch a glimpse of Max in England as she attends some sort of Buddhist art seminar. Then, we see Sam creating a For Sale by Owner sign. She sticks it in the ground in front of Phil’s house.

At night, Sam is in her car and Facetimes Phil, who’s with her friend, Ben, serving breakfast in their pub. Phil laments the fact that Sam spends so much time alone and says, “One day, your knight on a white horse is going to come through and swoop you up!” But Sam doesn’t want that, and in this very moment, she realizes she’s happy.

Sam tries to tell her mom that she wishes she had a quarter of her strength, but Phil doesn’t quite hear her over the hustle and bustle of the bar.

Sam goes for a ride as men on the radio discuss meteors, aliens and eclipses. We end with a montage set to the tune of Monty Python’s “Always Look on the Bright Side of Life,” as the cast breaks the fourth wall to serenade us with the cheery tune. In the very last bit, Sam looks directly into the camera and gives us a wink, as mysterious objects float around in the sky above.

And that’s a wrap on Better Things! Grade the finale (and final season) below, then tell us your thoughts in the Comments!