Liars were exposed and two romances came to an abrupt end on Sanditon‘s exciting Season 2 finale Sunday night on PBS.

The moment of truth came for artist Charles Lockhart when Sidney’s trunk arrived from Antigua containing a letter that warned Tom and Arthur about the portraitist and his desire to steal Georgiana’s sizable inheritance. Tom, Mary and Arthur showed up to the Hankins’ home just in time to stop Georgiana from running away and marrying the charlatan, and the dreamy young woman was once again disabused of her blind trust in romance.

Georgiana not only broke up with Charles on the spot, but she quoted his argument from the suit he filed against her late father’s estate, where he questioned her paternity and stated he was more deserving of his uncle’s money than her. (Ugh. Wouldn’t that mean he and Georgiana are cousins?) Charles initially refused to leave and called Sanditon and its residents “preposterous.”

This is when Arthur chimed in and said he and the beach town’s other inhabitants might be preposterous, but at least they were honest and sincere. Thankfully, there was also a bit of good news for Georgiana when she learned from Sidney’s correspondence that her mother had been looking for her and might still be alive. 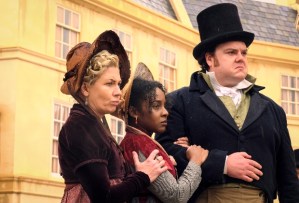 Over at Lady Denham’s palatial mansion, Clara exposed Edward for the monster he is when she broke Esther’s wine glass at the pre-wedding breakfast and revealed that her fiancé had been poisoning his unsuspecting stepsister. Clara admitted that they’d been stealing and hiding Lord Babington’s letters to his wife Esther, and Clara went on to beg for forgiveness.

Needless to say, Clara and Edward’s wedding was off. To Lady Denham’s surprise, Esther forgave Clara because she felt like the new mother was as much a victim of Edward’s evil ways as she was. Perhaps this is why Clara ran away by episode’s end and left her son George in Esther’s care to raise as her own.

The final (and only heartbreaking) uncoupling occurred between Charlotte and Alexander. At first, the widower couldn’t get enough of Charlotte and kept kissing her and holding her hand. However, self-sabotage and doubt got the better of Alexander after he talked to Colonel Lennox, and suddenly he decided that Charlotte deserved a version of love better than what he could offer and fired her as the girls’ governess. 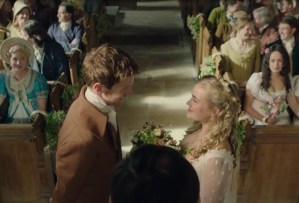 He offered to pay Charlotte six months’ worth of wages as a consolation, but an outraged and teary Charlotte passionately exclaimed it was never about the money and stormed off. Augusta watched Charlotte leave in a huff and begged her uncle to bring back Charlotte because she had been so wonderful to her and Leo, and she’d even made Alexander a better man, too.

Alexander chased after Charlotte, but when he met up with her, he didn’t ask for her hand in marriage. Instead, he tried to rehire her as his governess, and a disappointed Charlotte turned him down. Two months later, Charlotte got engaged to that farmer dude Ralph from her town, and Alexander and the girls moved away to parts unknown.

At least Charlotte’s sister Alison got a happy ending when she gleefully married former redcoat Declan Fraser. The captain-turned-farmer originally trapped Alison in the friend zone, but eventually came to his senses (after Will, of all people, challenged his choice) and asked her to be his wife. Here’s hoping Charlotte and Georgiana have better luck in love next season.

What did you think of the Sanditon Season 2 finale, and are you disappointed in Alexander’s cowardice? Grade the closer in our poll, and drop your thoughts in the comments.