In Gaslit, Starz’s new retelling of the Watergate conspiracy, it’s no surprise that G. Gordon Liddy is the first to grab the mic. “History isn’t written by the feeble masses — the pissants, the commies, the queers and the women,” the political zealot tells us. “It is written and rewritten by soldiers carrying the banner of kings.” As he lectures, he’s scorching his hand over an open flame and embracing the pain.

Thus is our introduction to this fresh spin on Nixon’s re-election campaign and the scandal that followed, only this time, the story revolves around the lesser-known character who made up his inner circle. In addition to Shea Whigham’s Liddy (read our Q&A with the actor here), Julia Roberts stars as Martha Mitchell, a socialite from Arkansas who becomes the first person to publicly speak about Nixon’s involvement in the Watergate break in. It’s a tale woven deeply into the fabric of American history, but here it’s told with a quirky sense of humor and from a fresh new angle.

The series begins in 1972, five months before the break in, as Martha “the mouth of the south” Mitchell, wife of Attorney General John Mitchell (Sean Penn), is making the rounds on TV programs like To Tell the Truth and Rowan & Martin’s Laugh-In. As Martha’s image is strewn across the TV in John Dean’s (Dan Stevens) hotel room, a lady friend tells him she hears the White House is going to be conducting some “spring cleaning.” The tip worries him deeply.

Dean goes to see his boss, John Mitchell, who says he’s “re-evaluating” personnel. Dean isn’t being let go; rather, he’s being offered a “special opportunity,” (LOL) that is definitely not espionage, Jeb Magruder (Hamish Linklater) assures him. (It’s just linked to espionage — totally different!) They’re looking for someone to help them with some simple intelligence gathering. “We must become snakes,” Mitchell says, in order to help defeat the Democrats. Dean tries to decline, but when Mitchell says the request came straight from the president, Dean says he knows a guy named Gordon Liddy who would be perfect for an operation of this scope. If they bring him on, Dean promises to show him the ropes and answer any election compliance questions he might have. 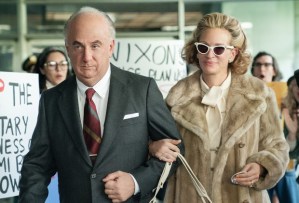 Meanwhile, Martha is giving an interview to Winnie McLendon (Allison Tolman) from the Ladies Home Journal. The writer asks Martha if her ease with the press has put her at odds with Nixon, and whether her comments against the war have created any tension with her husband or the president. Martha says she learned long ago that she will say how she feels, and if it doesn’t conform to the president’s message, so be it.

Martha’s husband storms and demands the journalist be removed from the property. Clearly, Martha has been ignoring her husband’s requests that she halt all interviews. He claims she’s just trying to steal the spotlight from Pat Nixon. Martha denies it, but it does seem at least partially true.

Liddy arrives to the White House to pitch Operation Gemstone. His plan is pretty bonkers, and includes rounding up the Democrats’ fringe activist leaders and “exporting” them to Mexico, while also filming Democratic officials on a boat with hookers. “Call it a passion play for opposition leverage,” he says. “This is where we get to play God.”

Gemstone doesn’t go over well because in the very next scene, Liddy is knocking over furniture and slugging bourbon. Liddy asks Dean what he thought of his plan, and Dean cautiously says he liked it. (Mostly because Liddy seems like a total nutjob who might murder him where he stands.) But that said, Dean says they should never talk about it ever again.

The next day, Dean arrives to work to find Liddy in Mitchell’s office. Liddy made some adjustments, paring down his operations to something more manageable. To thank Dean for his work, Mitchell invites him to Martha’s fundraiser at his house. Of course he has to bring a date. “Something nice on the eyes,” says Mitchell. 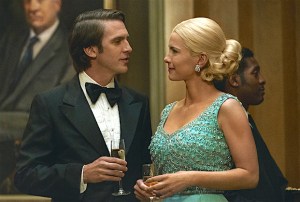 Dean meets Mo (Betty Gilpin), a flight attendant from L.A., through a dating service. The topic of Nixon comes up, and Mo thinks the president is a huge liar. Dean fires back at liberals, thereby assuring they have the most awkward first date ever. But later, Dean “runs into” Mo at the airport (he stalked the hell out of her), and she calls him “a little psychopath” for tracking her down. John invites her to the fundraiser anyways and once she finds out it’s for the Mitchells, she promises to think about it.

The night of, Dean picks Mo up for the event, and she’s absolutely tickled to meet Martha. Dean later finds out from Nixon’s Chief of Staff Bob Haldeman (Nat Faxon) that it wasn’t the president who requested him after all. He was manipulated by Mitchell. “Learn to recognize a snake when you see one,” Haldeman suggests.

Mitchell and Martha get into a spat mid-event about Martha’s perpetual interviews. She bites back about how much time Mitchell spends with Nixon and how much he’s been ignoring her feelings. “Your d–k must look so big in his tiny hands!” she jokes. But Mitchell ain’t laughing! He slaps her across the face, and she returns the favor. “My mama slaps me harder than that.” (I like this woman already.)

The election is around the bend, and Mitchell asks Martha to keep things quiet for just a few more months. “Get another wife if you want a silent one!” she barks. He tells her there’s no conspiracy against her. People just don’t like her, and that’s why the couple can’t fly on Air Force One. And the journalists aren’t her friends, he says. “They just can’t take their eye off a good show.” Ouch.

The next day, Dean goes to hand in his resignation letter to Mitchell, only his boss isn’t in. While at Mitchell’s desk, he finds a message from Haldeman. Nixon wants to meet with Dean after all. Dean changes his mind about resigning and exits the office.

At the end of the episode, we see our first glimpse of CIA officer James McCord (Chris Bauer) and Liddy pulling up to the Watergate hotel, and as Dean lays in bed with Mo, he puts his hand directly over a candle. Unlike Liddy, he doesn’t last long at all. He screams and almost immediately pulls away.

Now it’s your turn! What did you think of Gaslit‘s premiere? Grade it in our poll below, then drop some comments!