Sister Monica Joan might be an Anglican nun, but she is not without her superstitions, as fans learned on Sunday’s Call the Midwife.

When a crow ominously flew into Nonnatus House and got trapped inside, the woman of God worried death would come for her or one of the other nuns or midwives. So she sought confirmation from a clairvoyant that Miss Higgins recommended named Dulcie Greenhalgh. Sister Monica Joan visited the woman, but the psychic slammed the door in her face and screamed that she no longer predicted people’s futures. 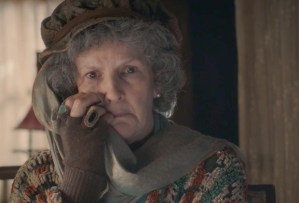 Dr. Turner also said Mrs. Greenhalgh shouldn’t worry because it wasn’t a life-threatening form of cancer and the ulcer could be surgically removed at the hospital. But Mrs. Greenhalgh refused to go to the hospital, so Sister Monica Joan returned yet again, and this time, she had the patient’s estranged son with her. Seeing Arnold’s face instantly cheered up his mom, and Mrs. Greenhalgh agreed to get the medical care she desperately needed because she had a reason to live now.

The mystical mommy was so grateful to Sister Monica Joan, she agreed to do a psychic reading for her, and was so disheartened by her vision, she initially refused to share it. A fearless Sister Monica Joan demanded the truth, and Mrs. Greenhalgh revealed that her spirit guides predicted an “unfortunate” happening at Nonnautus House. Gasp! 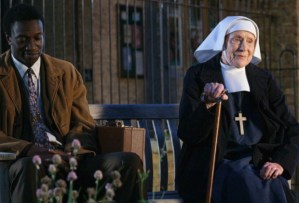 In between visits to Mrs. Greenhalgh and her eventual vision, Sister Monica Joan also helped a contemplative Cyril when she saw him sitting alone on a park bench. The nun challenged the civil engineer by saying the easiest choice wasn’t always the best one. Sister Monica Joan then urged Cyril to tell his wife, Nurse Lucille, that he was grieving the loss of their unborn baby, too, and “sometimes we show our true strength by acknowledging our weakness.”

Cyril’s first attempt to talk to Lucille didn’t go well, and his wife admonished him for putting their business in the streets. Time helped heal Lucille’s pride, and when she was able to better communicate, she apologized to Cyril for trying to be so strong that she shut him out. Cyril stated that they couldn’t be strong without each other. He further comforted Lucille by adding that her miscarriage wasn’t a failure, but a sign that the pregnancy wasn’t meant to be, and their shared pain would help them heal.

Elsewhere in the episode, Nurse Shelagh delivered the baby of a hippie squatter, whose newborn daughter suffered from gastroschisis. It’s a condition where a baby is born with his or her intestines on the outside. Nurse Shelagh stayed calm, and with Matthew’s help, safely transferred the hippie to the hospital. The baby had a successful surgery, and the woman (whose real name was Susan) decided to give her hippie name, Clover, to her strong-willed daughter.

What did you think of the latest Call the Midwife? And are you worried about Mrs. Greenhalgh’s premonition? Drop your thoughts and theories in the comments.