Our favorite hitman is in pretty rough shape as Barry kicks off its third season — and things are about to get rougher.

Sunday’s premiere finds Barry standing in an open field and eating a snack while we hear a guy pleading for his life. He’s been hired to kill the pleading guy, but the guy that hired him changes his mind, even though the pleading guy slept with his wife. “I’m forgiving Jeff,” the client decides — so Barry shoots them both in the head. (“There’s no forgiving Jeff,” he shouts.) Back at home, he glumly plays video games on the couch while Sally runs off to shoot her new TV show. She asks him to bring her flowers to the set, adding: “If I say you can stay for lunch, just know that you can’t!” Thanks, babe! 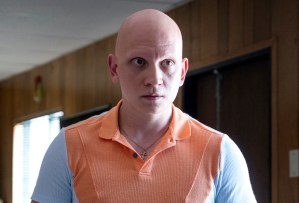 Our old pal Noho Hank, meanwhile, is using a plant nursery as a front for trafficking heroin when detectives come around asking about the monastery shooting. (“This is my first interrogation,” Hank admits to his fellow Chechens. “I’m, like, legit nervous.”) He plays it cool in the interrogation room, but he’s stunned when the cops show him the Chechen pin they found on Moss’ dead body. (You know, the pin Hank gave to Barry.) Hank points the finger at Fuches, who he says goes by the name “The Raven.” He killed Moss and shot up the monastery, Hank claims. And conveniently enough, Fuches is safely tucked away in a humble shack in the mountains of Chechnya, complaining that he can’t watch college football.

The cops call in Gene Cousineau, and he identifies Fuches as the guy who showed him Moss’ body. The cops think “The Raven” killed her, and they’ve cleared Barry of the crime. Gene isn’t convinced, though: “Ever since I met that punk, bad things have happened to me.” Bad things are happening to Barry, too: He scrolls through a janky online marketplace for hitmen, taking a job where a woman wants her husband dead — and he ends up asking the woman for advice on which flowers to buy for Sally. Speaking of Sally, she seems to be writing and starring in her own TV show (good for her!), and Elizabeth Perkins plays a network executive who asks dumb questions and doesn’t seem to know which show she’s even talking about. (Plus, Sally’s old classmate Natalie is her assistant now.) Sally runs the set like a pro and snaps right into character when the cameras roll… but once she steps off the set, she looks a little lost.

A beaten-down Barry arrives to bring her flowers, and Sally pretends to be surprised… and Barry has a grisly vision of a bullet piercing her forehead, with blood trickling down her face. As Hank settles in for a cozy night in with Cristobal — yes, the onetime mob rivals are now a couple! — Barry sneaks into their backyard and surprises Hank, asking for a job: “I’m kinda losing my mind, man, and I need help.” Hank reminds him that he shot a lot of Hank’s Chechen friends in that monastery and also tried to frame Hank for Moss’ murder. “Forgiveness is something that has to be earned,” he tells Barry before declaring he can’t help him. But Barry does get a text from Gene asking him to come by the theater the next day — and Gene retrieves a pistol he got as a gift from Rip Torn (ha!) before saying an ominous goodbye to his son and grandson. 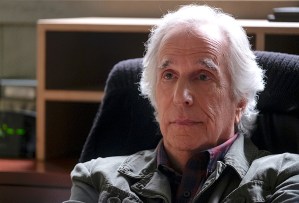 Gene sits stone-faced as Barry arrives at the theater, walking past a sign that reveals it’s closing after 15 years. When Barry asks if Gene might try acting again, Gene fires back: “My career is s–t, Barry. You know that.” He remembers back to the day he went into the woods with Fuches to see Moss’ body — and he reveals what Fuches told him, too. “I know you killed Janice,” he says, pulling out his gun and telling Barry he can either turn himself in “or f–king die.” But then the gun falls apart in his hand, with the cylinder rolling harmlessly to Barry’s feet. So Barry takes Gene to that same open field, holding a gun on him as he swears not to tell a soul. Barry again pictures a bullet piercing his forehead… but even that isn’t enough to stop Gene from talking. Barry quotes Hank, saying that “forgiveness has to be earned,” and Gene yells back: “Then f–king earn it!” That gives Barry an idea: “I know how I can make it up to you.” He breaks into a wide smile before ordering Gene: “Get back in the trunk.”

Was the Barry premiere worth the wait? Give it a grade in our poll, and hit the comments to share your thoughts.