The following contains spoilers from the first two episodes of The Flight Attendant Season 2.

The good news for The Flight Attendant‘s Annie and Max? Their famously unconventional relationship — she refuses to refer to her new engagement ring as such — is nonetheless making strides.

“They’re taking a lot of baby steps in the right direction,” Akdeniz continues, noting: “It might not be for everyone else, but for these two, that is how their new chapter begins.” 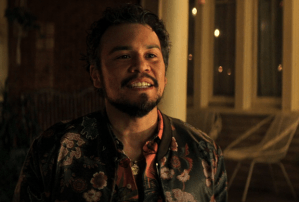 The (very) bad news for Annie and Max? At the end of Episode 2, they returned to Cassie’s Los Angeles home (where they are crashing during a brief visit) to find a strange man struggling with the front door. Confronted, the stranger, Esteban (played by Gentefied‘s JJ Soria), claimed he had simply mistaken their bungalow for the Airbnb he rented next door — from which his statuesque wife Gabrielle (Soundtrack‘s Callie Hernandez) then emerged.

Annie, for one, thus far doesn’t quite seem to be buying what Esteban is selling, especially since “Mr. Waffles,” the dog squirming in Gabrielle’s arms, looked quite skittish. Viewers, meanwhile, know for certain that the Diazes are up to no good. For one, we saw them surreptitiously clone Cassie’s phone at the airport. And as the Annie/Max scene from Episode 2 played out, it was revealed to us that Gabrielle is concealing a taser gun behind her back — and the actual homeowners are gagged and bound in a back room!

How worried should we be for Annie and Max, who nearly caught the Diazes in the act… of something?

“Very concerned,” says Mamet. “Terrified,” adds Akdeniz. “If you thought that [introduction] was strange and odd, it only gets stranger and odder and more dangerous in the episodes to come.”

“Something shady is happening,” Mamet previews, “and it’s way worse than you could imagine. But JJ [Soria] and Callie [Hernandez] are incredible. The stuff that they do and their chemistry is so wonderfully terrifying and unsettling…. It’s pitch perfect.” 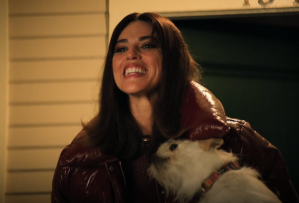 But make no mistake, “[Esteban and Gabrielle] are genuinely bad people that do very bad things!” Mamet warns.

As you might expect in the wake of this tease — and knowing that Cassie herself will be very occupied with the many flavors of drama going on in her own worlds — Annie and Max will be much more active characters in Season 2 of the dramedic thriller.

“They’re more embroiled in the the murder, mystery and espionage than before. They’re right in the thick of it,” Akdeniz attests. “They’re even getting themselves into danger, so it was fun to be a part of the madness.”

“We really notched it up this season ‘to 11,’ in all ways,” raves Mamet. “Even the camera movement of of all, like that shot at the end of Episode 2 when Callie is holding that taser behind her [and then the camera winds into and around the house]. That was a super-complicated shot to get right, and it was cool from a technical standpoint to see how much work went into getting that. And it was totally worth it! In all ways, with so many different elements, it’s a really fun season.”