We know you came here to discuss the final moments of Moon Knight Episode 4, which co-director Justin Benson calls a “massive turning point in the story,” but there are some important events we need to work through before we arrive at that truly bonkers conclusion.

The episode begins with Layla and a now-powerless Steven arriving at Arthur’s dig site, where a series of discoveries rattles the couple beyond the point of comprehension. For starters, there’s a weird love triangle thing happening between Layla and the two personalities. After Steven tells Layla the truth about Khonshu wanting her as his next avatar, she finds herself attracted to his honesty, something Marc always lacked. But when she expresses that attraction with a kiss, Marc gets so jealous that he makes Steven punch… himself.

Their journey brings them through all manner of historical nooks and crannies, including the long-lost tomb of Alexander the Great, who was apparently Amit’s most recent avatar. During the mission, Layla tells Steven about her late archeologist father, to which Steven offers his condolences, clearly unaware of Marc’s involvement in the incident. But don’t worry, Arthur shows up when the two get separated and is more than happy to spill the beans: Layla’s father was killed by mercenaries… and Marc was one of them! (Awkward.)

Layla is understandably irked when she eventually reunites with Steven, who allows Marc to take over when Layla demands an explanation. Marc admits to being present for her father’s death, but he explained that it was his partner in crime who got greedy and executed everyone else at the dig site. The truth doesn’t make Layla feel much better. “That’s the reason we met, because you had a guilty conscience?” she asks. (Oof! Maybe she is better off with Steven.)

And that’s where things get truly crazy. Arthur shoots Marc multiple times in the chest, sending our hero tumbling down a dark abyss. He’s called toward a mysterious light, then suddenly finds himself in a psychiatric hospital.

Marc is a patient in this new reality, where he’s a huge fan of Steven Grant, an Indiana Jones-type action hero. And wouldn’t you know it, Steven’s latest movie happens to be about a lunar god. Adding to the mystery, Marc has a whole ass Moon Knight action figure in his possession.

There are also plenty of familiar faces in this facility: Layla is a fellow patient, while Arthur is the counselor overseeing their progress, and he sucks just as much in this reality as in the last one. Maybe even more. Anyway, Arthur sedates Marc, who manages to escape into a small room with a sarcophagus. And who should he find inside? Why, none other than Steven! (Two Oscar Isaacs? This crappy reality just got a whole lot better.)

The last thing both Marc and Steven remember is being shot by Arthur, so they’re basically just as confused as the audience. 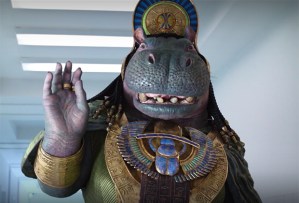 That confusion is only compounded by the final moments of the episode, which ends with Marc and Steven being greeted by a giant, adorable hippo. Though it isn’t explicitly stated int he moment, this stunning creature is actually Moon Knight’s version of the Egyptian goddess Tawaret, played by Antonia Salib.

Salib has been relatively mum about her character (for obvious reasons), offering this vague insight to our sister site Variety on the premiere red carpet: “It felt like I was given license to create my character and everyone was on board to work together.”

So, what do the final two episodes of Moon Knight have in store for us? Put simply, “episodes five and six are going to blow your mind,” executive producer Grant Curtis tells TVLine. “There’s a whole world of Moon Knight’s history that you have not been able to watch in those first four episodes that you will in the last two. Big fans of the comics who do know his history are going to be happy.”

Speaking of being happy, wherever Benson and co-director Aaron Moorhead are right now, they’re definitely in good spirits.

“We’re most excited to see how people react after Episode 4 but before Episode 5,” Benson told TVLine ahead of the show’s premiere. “That’s going to be a very exciting week.” It is, indeed.

Your thoughts on Moon Knight Episode 4? Grade it below, then drop a comment with your full review.