Sanditon fans who have grown tired of the Charlotte/Alexander/Francis love triangle received a welcomed development when the governess chose the widower over the Redcoat on Sunday night’s installment.

Charlotte and Alexander have always had more chemistry as proven when she urged her boss to take Augusta to that evening’s ball. As part of her argument, Charlotte wondered why Mr. Colbourne had hired her to ready his niece for society, only to keep the teenager at home.

When Charlotte reasoned that his actions rendered her job untenable, Alexander challenged her by saying perhaps she needed to consider employment elsewhere. Just when Charlotte had given up on Alexander and danced with the colonel at the ball, Alexander shocked her by showing up to the event with Augusta.

Alexander and Charlotte danced and the sparks between them lit up the ballroom as they locked eyes. The widower confessed that Charlotte had changed his life for the better and had done the same for Leonora and Augusta. Touched and humbled by the compliment, Charlotte excused herself after the music stopped so she could sort out her thoughts about the man she thought she hated. 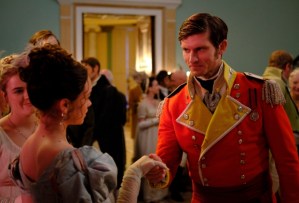 Charlotte wasn’t alone for long after Alison came up to say she noticed the sparks, too. But Alison thought Charlotte was falling in love with Colonel Francis Lennox. Before Charlotte could correct her younger sister, Francis rolled up and once they were by themselves, he asked her to marry him. Charlotte’s prompt rejection and admission that she didn’t love him angered Francis, who forcibly kissed her and barked that she should know her place and be flattered that a high-ranking Redcoat such as himself would want a spinster like her.

The farmer’s daughter calmly replied that she knew who she was and never pretended to be anyone else. As Charlotte ran down the stairs to get away from Francis, Alexander met her at the bottom to check on her because she looked so frustrated. Alexander explained that Lennox’s behavior was what he’d warned her against, but Charlotte rebutted that he’d never actually told her anything specific about why the colonel was dangerous.

Charlotte added that Lennox had badmouthed Alexander and when he demanded to know what the heel had said, she confessed that Francis claimed Alexander had stolen Lucy, his late wife, away from Francis and destroyed her soon after. Horrified by Lennox’s lies, Alexander insisted that Charlotte join him and Augusta as they returned home and so she did. 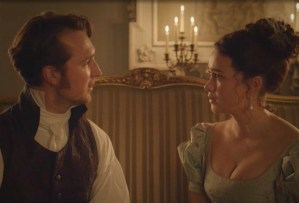 Mrs. Wheatley, the house manager, was pleasantly shocked to see Charlotte after work hours and quickly ushered the girls off to bed. Alone again, Alexander revealed that Lucy had an affair with Francis and became pregnant with Leonora as a result. Alexander took Lucy back but treated her cruelly, and Lucy was so hurt and embarrassed, she wasted away soon after her daughter was born and eventually died.

Unbeknownst to Alexander and Charlotte, Leo heard everything the man she thought was her father had said and brokenheartedly ran back to bed. Around that same time, Charlotte begged Alexander to forgive himself and declared that his past would thwart his future if he didn’t overcome his guilt. She also reasoned his future with her could be sweet, and Alexander was so moved by Charlotte’s words that he pulled her in for a passionate kiss.

Alexander and Charlotte weren’t the only ones locking lips. Georgiana and Charles had kissed earlier that day while he worked on her portrait, and they even danced at the ball. Soon after, Charles confided that he was leaving the next day and wanted Georgiana to run away with him and be his wife, but before she could respond, Mary walked up and whisked her away. Whoa. What will Georgiana do now?

Last but not least, Alison confronted and castigated Will at the ball for lying to her, and then happily danced with Declan. That’s when Alison finally realized the captain has cared for her all along and, just as suddenly, Alison realized she was falling in love with Declan, too. Will Declan stick around Sanditon to get to know Alison or will she run away with him? All will be revealed in next week’s finale.

What did you think of the latest Sanditon and are you hoping all three ladies settle down with the new men in their lives? Drop your thoughts in the comments.