All this and bagpipes, too?!? Season 7 of Fear the Walking Dead resumed on AMC Sunday with a trippy episode in which Alicia made a new friend, lost a new friend, engaged in some especially fanciful dream analysis and, yes, was treated along with the rest of us to some bagpipe-playing. And if you read on, we’ll go over all of the latest speed bumps and potholes that she hit on the never-ending road to mythical Padre.

TO SLEEP, PERCHANCE TO SCREAM | After “Follow Me” started us off with a dream sequence in which the late Sen. Vasquez’s reanimated corpse urged Alicia to follow him down the yellow brick road to Padre, our heroine awakened and made the acquaintance of a deaf musician named Paul, who had found her unconscious in a barn and taken her to his soundproofed house (which seemed to have an endless supply of electricity, no?). Since to save him from a walker, she’d broken the stereo that he was blaring to feel the music a la Beethoven, he didn’t want her to leave without helping him obtain a new one. (Priorities!) Before they could run out to the closest post-apocalyptic Radio Shack, though, Arno came knocking like he was an Avon Lady doing Tusken Raider Raider cosplay. Too half-assed in his search of the house to notice Alicia hiding in the piano — yes, in it — Arno left Paul with a walkie-talkie to call him if she turned up. (Just me, or does there appear to be a stunningly vast supply of post-apocalyptic walkie-talkies out there? Should we all have 50 lying around just in case?)

Once Arno left with his men in a truck full of walkers, Alicia and Paul got to know one another better. She admitted that her pursuer blamed her for getting a bunch of his people killed following Walker Vasquez to nowhere. “Hey, you tried,” Paul said. She didn’t have to keep beating herself up about it even if the Stalkers wanted to. For his part, Paul admitted that he played all of the instruments in the house except for the bagpipes, which had been his late wife’s thing. (Eat your heart out, Lisa Simpson.) Her scream was the last thing he heard before Teddy’s warheads blew out what had been left of his hearing; now the stereo helped drown out the sound. Just as the twosome found a new stereo at a concert hall, and Alicia invited Paul to join her in trying to take Strand’s Tower, Arno showed up. He would’ve fed Alicia to her “victims” in his truck if Paul hadn’t started shooting. In the ensuing melee, he dropped the stereo (dang it!), and Arno escaped. No more did Alicia want Paul to join her. Arno was right, people around her got hurt, she decided. But Paul was now convinced that they could help one another drown out what they didn’t want to hear — his wife’s scream for him, that voice saying “Follow me” to her. 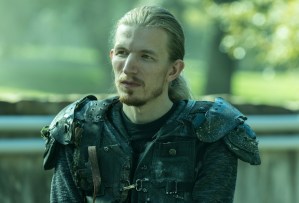 A WAKING NIGHTMARE | First, Alicia and Paul would have to dispense with Arno and the Stalkers. To do that, Paul walkie-talkie’d the villain to stop on by his house, at which point he’d attracted walkers by cranking the stereo that he’d lifted from his and Alicia’s getaway car. Things didn’t go quite according to plan, however. Walkers wound up in the house, the music died, Arno shot Paul, and he and Alicia found themselves holed up in a bedroom. He wanted her to go, she insisted that the wouldn’t… you know the drill. In the end, she allowed her dying pal to play the bagpipes to provide sonic cover for her to make her escape. On the road, she bumped into the girl who’d apparently helped her into that barn and, feverish as she was, collapsed. After that, we watched a variation of the dream that started the episode. This time, however, it wasn’t Walker Vasquez telling Alicia to follow him to Padre, it was Alicia telling herself to do so with all the series regulars behind her instead of the ill-fated Stalkers. 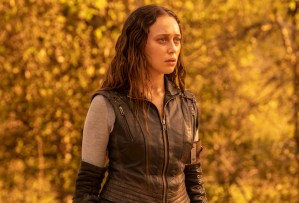 When Alicia awakened, she was on Morgan’s submarine. In short order, she admitted that she hadn’t been able to convince Arno to help them take the Tower. But she knew how to raise an army. She was going to return to the bunker and use its radio to send a message out to people like them, people that just wanted a safe place to live. Madison had had her dream, Alicia noted. Nick had had his. So had Morgan. Now it was her turn. (If you say so… ) Paul had guessed that the voice telling Alicia to “Follow me” had been hers all along, and now Morgan reckoned that she herself was, in a way, becoming Padre. All he had to do was be ready when Alicia returned, she told him. As the episode drew to a close, Arno and another Stalker gazed down upon a cavern full of trapped walkers. It was noisy and hard to hear, but as far as I could discern, they were going to use the horde to take the Tower for themselves.

So, what did you think of the midseason premiere? Waaay too much navel-gazing for me. And nice as Paul was, aren’t there long-running characters that haven’t had a meaningful scene in so long that the time we spent with him would’ve been better spent on them? Hit the comments with your thoughts after grading the episode below.