Form of… a brontosaurus!

OK, truth be told, we don’t yet know what Zan and Jayna’s powers will be in HBO Max’s The Wonder Twins movie comedy. But now we know who will be playing the titular twosome. 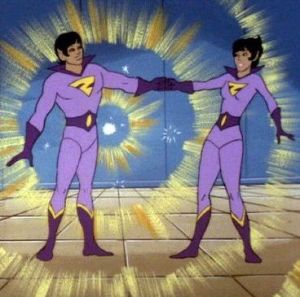 According to our sister site Deadline, Riverdale‘s KJ Apa and 1883‘s Isabel May have been tapped to respectively play Zan and Jayna in the streaming flick, which is on track to film this summer in Atlanta.

Riverdale last month was renewed for a seventh season.

The Wonder Twins’ premise and the characters’ specific powers — in the Super Friends cartoons, at least, Zan infamously could take on a form of water, ice or even steam (!), while Jayna was able to transform into an animal — are still under wraps.

Adam Sztykiel, co-writer of the Dwayne Johnson-starring Black Adam DC film that is currently scheduled for an Oct. 22 release, is set to make his directorial debut with The Wonder Twins, off of a script that he wrote.

Watch some of Zan and Jayna’s groan-worthiest hits: