A lot of changes happened on Wednesday night’s Snowfall. The biggest one is that Franklin learned that his Aunt Louie and Uncle Jerome had double crossed him and gone to Teddy, the family’s plug, to get their cocaine directly from him.

Not only did this make Franklin feel betrayed, but he also realized that the move would essentially put him out of business unless he relocated his operation to another part of the country. Making matters worse, he learned that Louie and Jerome had branched out to St. Louis and Arkansas using his expansion vision.

Realizing that he had put his family first but they weren’t doing the same, Franklin saw the betrayal as an omen that it was time for him to bow out of the drug business. It was something he had talked about with Veronique anyway. Plus, the fact that Kane is still alive means that the family’s latest and greatest enemy could recover and retaliate (unless Buckley goes back to finish the job).

By making a “great resignation” move and taking himself out of the drug game, Franklin could actually create a way to protect himself, Veronique and their unborn baby. Franklin’s treatment of Leon has also been less than convivial, as proven by the fact that Leon had never even stepped foot into his high-rise Wilshire condo. Perhaps getting out of the business would allow Franklin to be the friend Leon deserves. 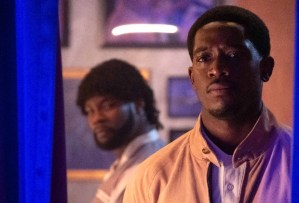 Of course, when he met with Teddy to tell him the news, the shady CIA agent was less than enthusiastic. Teddy even attempted to convince Franklin to stay in the drug business by reminding him of all the money their partnership had netted him over the years.

Franklin wasn’t trying to hear it, and rightfully rebutted Teddy’s arguments by reminding him that he’d sold out his father Alton, gotten shot, gone to prison and even killed people to keep the business going, only to have Teddy, Louie and Jerome sell him out. Franklin stood up to shake Teddy’s hand and he shook it back, but you could tell Teddy has bad, bad plans for our guy, Mr. Saint.

For starters, Teddy broke into Franklin’s condo in the last episode to take photos of files Franklin had locked in his safe. Could he use those files to get Franklin locked away? He also knows where Cissy lives and could hurt her to hurt Franklin.

Avi and Cissy are the wild cards in this game and now that Franklin’s mom is working with the KGB and Ruben has knocked Avi out cold, something tells us all of this spy versus spy madness could work in Franklin’s favor. We’ll have to wait and see.

What did you think of the latest Snowfall and do you think Franklin can really walk away? Drop your thoughts in the comments.