NBC has greenlit a summertime revival of the iconic game show Password, to be hosted by Keke Palmer and feature Jimmy Fallon — who has made the guessing game a part of his late-night talk shows over the years — as a recurring celebrity player.

The premiere episode will be dedicated to the late Betty White, who is well remembered for her appearances on the original Password and occasionally participated in Fallon’s Late Night version. The eight-episode season will culminate with a special episode featuring a star-studded, all-celebrity lineup playing for charity. 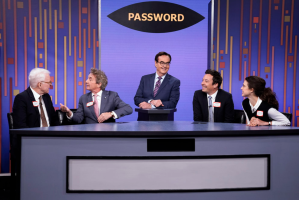 Palmer — whose TV acting credits include Star and Scream Queens, and who stars in this summer’s Jordan Peele chiller, Nope — will host as “contestants from all walks of life are partnered with Jimmy Fallon and other celebrities to face off in the ultimate game of words.” Fallon will play in each of the hour-long episodes as the celebrity/contestant duos compete for cash prizes by guessing a secret password using only one-word clues.