The following contains spoilers from the April 12 episode of CBS’ FBI: Most Wanted.

FBI: Most Wanted this Tuesday introduced the team and viewers both to Special Agent Remy Scott, played by Dylan McDermott. And though Hana and the others had done due diligence to get the 411 on their new team leader — among other things, the 23-year Bureau vet/”straight shooter” worked Violent Crimes in Philly for a spell, and most recently was with the Fugitive Task Force —  it wasn’t until the episode’s final moments that they really learned his deal.

Midway through McDermott’s first episode, titled “Covenant” and having to do with a church/cult that preyed on a young woman named Lillie, Special Agent Scott in talking to a POI made reference to his brother having died, raising an eyebrow or two on those within earshot.

At episode’s end, as the team kicked back at one of those axe-throwing places, Hana invited the team’s new leader to expound on that bit of his past. Remy freely shared that his brother Mikey, the baby of the family and a “shining star” on track for a baseball scholarship at Syracuse, went to Florida for spring break as a senior and went missing after a night at a bar. The Fort Lauderdale PD brought in a transient with a record, Larry Michael Davis, who has been seen hassling Mikey outside the bar, but said they “didn’t have enough to hold him.” Hours later, Mikey was found freshly stabbed to death in Davis’ tent.

“They screwed up. Mikey was still alive when they let Davis go. And he went back and he killed my little brother,” Remy related. “After Mikey…. I just… I just got real. Three months later I was at Quantico, and I’ve been with the Bureau ever since.” In other words, it is that tragedy that fuels Scott’s fight as a fed. “Every bad guy I catch, I do it for [Mikey],” Remy avowed. 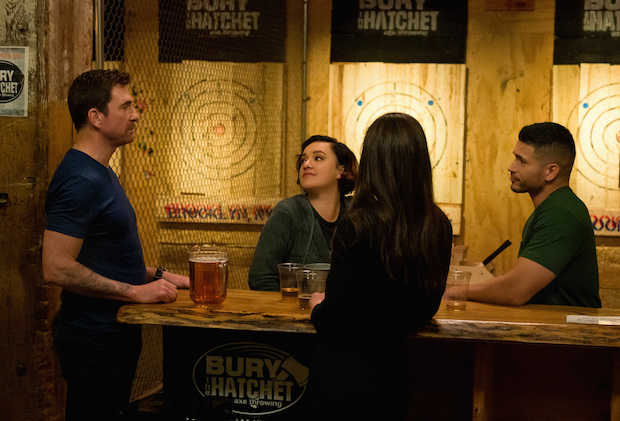 Speaking with the press last week about his character’s tragic share, McDermott said, “I love that scene. I loved working on it, and it’s great that I had time to let it marinate over a couple weeks I had worked on it.

“I do some of my best acting in my bathtub, and so I had done some incredible performances that nobody ever gets to see,” he added, “but I really was working on it.”

McDermott explained that he found it “important” that Remy have a specific reason to be doing what he’s doing. “It fuels me as an actor when I have that,” he said, and multiples times in the episodes he has filmed so far, he has been able to tap into that bit of backstory. “On any show, you end up tiring, so for me, I always like to find the few things that I can keep going back to and refreshing it for myself, and I think we found that with Remy….  I know that I’ve used it several times already.”

“He’s on a mission. He’s on a quest, and there’s a dynamic inside of him that he’s
trying to figure out; his own psychology,” McDermott noted. “I love playing that, to
have that in my toolbox every time I go out and do a case.”

Showrunner David Hudgins added, “We had already been in the writers’ room
talking about what drives this guy — ‘What’s the backstory going on here?’ — and on the very first meeting that Dylan and I had, that’s one of the first things we talked about.” And as for the timing of the disclosure, “we didn’t want to play it as this big, heavy, dark secret, dun-dun-dun-dun that’s going to always be underneath,” Hudgins said. Rather, “I love the way at the end of this episode he says, ‘Look. I’ll tell you about it. I don’t mind talking about it. Here’s what happened….’ The fact that he’s an open book about it I thought was also fresh.” 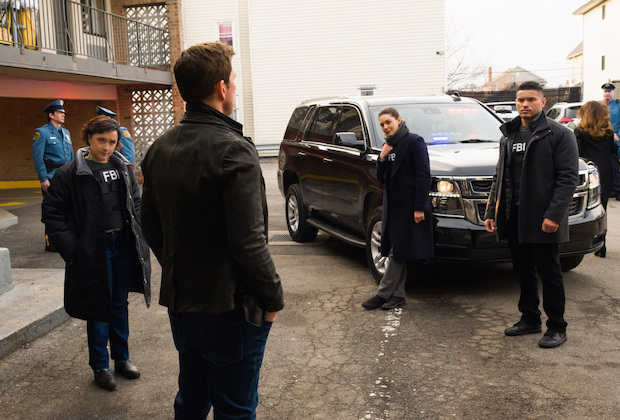 In getting to know Remy Scott, FBI: Most Wanted viewers were also given a bit to chew on by way of the scene that preceded the Mikey story. After tracking down the woman who had kidnapped the aforementioned Lillie (tl;dr her clergyman husband had raped/impregnated Lillie during an ECT session), Remy closed the motel room door behind his puzzled colleagues, to privately confront the perp.

According to Hudgins, “The intention of the writing was: He’s figured out
who this woman is, what she was all about. She’s gotten away with essentially reinventing and conning herself her whole life, and what he’s saying to her is, ‘I see you. I know exactly who you are, and you’re full of s–t. And not only that, you screwed up. You think you’re so great, but you made this one mistake,'” by fleeing in a vehicle with a GPS tracker. “I thought it was a moment for Remy to really shine.”

What did you think of McDermott’s debut as Agent Scott? Grade it below!

Want scoop on one of the FBIs, or for any other show? Email InsideLine@tvline.com and your question may be answered via Matt’s Inside Line.