Warning: The following contains spoilers for Tuesday’s Abbott Elementary finale. Proceed at your own risk!

Abbott Elementary closed out its very strong freshman season with a trip to the zoo that ended in splitsville for one couple.

During the unsanctioned field trip — Ava really wanted to go to the zoo, but not enough to notify the school district about the plan — wildly underqualified chaperon Tariq got an email from the F.A.D.E. program. They want him to come to New York for a year, and Tariq assumed that his girlfriend Janine would leave her beloved Philly behind to move with him. But after a heart-to-heart with a scared student, Janine told Tariq that they should take a break to figure out who they are without each other.

Does that split open the door for Janine and fellow teacher Gregory, who is now full-time at Abbott, but is seeing Barbara’s daughter? Below, star and creator Quinta Brunson talks about Janine’s big growth moment and what the future holds for Janine and Gregory.

TVLINE | Crafting the finale, what was important for you to get across?
Janine is growing up. And I think that for us, that’s been the theme of Jeanine’s journey this whole time. She’s growing as a teacher, growing as a human being, growing in this relationship — or growing out of this relationship. So I feel like when we finally got to the end, our finale, she finally knows that it’s time to grow, and it’s only the first step in her, we hope, very long journey as a young person. Right now, Janine’s 25. As the show keeps growing, she’ll grow into an adult, like a real-life adult. I know you think you’re an adult when you’re 25, but you’re not really. She has this dream of being like Barbara, and it’s not as simple as just snapping your fingers and being like Barbara. Also, she’s going to not turn into Barbara. We want her to turn into her own person. So the finale is the first step in that. 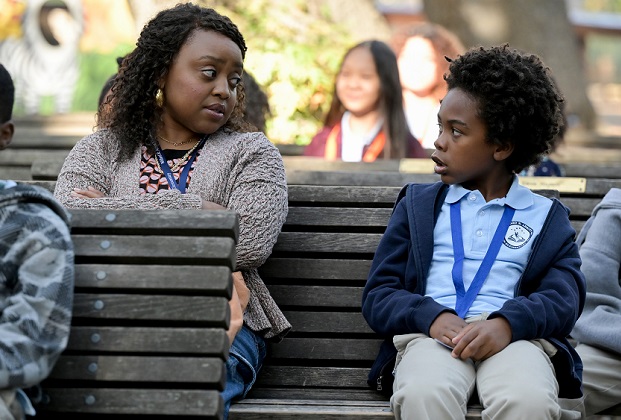 TVLINE | She definitely is finding herself as a teacher in that moment when she tells the kids to sit down. She’s finding her strength and her power as a teacher.
That’s one of my favorite moments because it’s a big leap for Janine. It’s a small step, but that’s so huge, especially in our first season. That was kind of the goal: How do we make her growth so small but so big at the same time?

TVLINE | On a personal level, in her romantic life, where is she headed?
I think the first step for Janine is to know her own self, and that is a part of her romantic life, as far as I’m concerned. Her knowing herself as an individual outside of the relationship with Tariq, it’s important for whatever comes next. I feel like this is a young woman who needs to know herself before she can know anyone else, whether that be Tariq again, some random guy [or] Gregory. She has to take her own kind of self love journey, and I think that’s what we’ll start to see with her. That doesn’t sound romantic, but it can be very romantic.

TVLINE | When you were crafting this finale, was there any debate about how far you felt like you should go with the Janine/Gregory “Will They/Won’t They”?
It felt like it’s too early in the series. In my head, I have an endgame for the entire show, every character. But say we wanted the room for that “Will They/Won’t They” to mean nothing maybe or later, I wanted the room to do that. That’s why we ended it the way we did with Gregory on his own journey and Janine on her own journey. These are two characters where if they meet in the middle and they are together, then that’s fantastic. And we want the audience to feel that way, too. We hope that the audience eventually feels like, “You know what, I’m happy for them on their own, but we secretly all know we want them to get together.” But we’re taking an old tradition and kind of trying to reinvent the wheel the way shows like Parks and Recreation, The Office, even like Sam and Diane, even Friends, all those [shows] have reinvented how that can look, and that’s our goal. 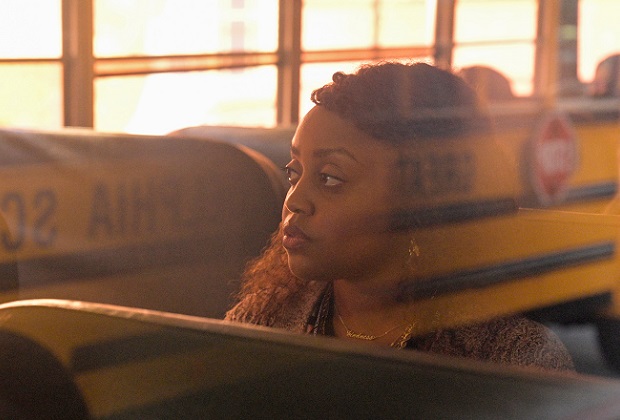 TVLINE | Does Gregory know that Janine’s staying, because he was sitting behind her when Barbara mentioned it on the bus?
[Smiles] I don’t know. We’ll find out.

TVLINE | Did Gregory factor into her decision to stay at all?
I don’t think that he consciously factored in. Janine, once again, is a person who doesn’t know herself as well as we, the audience, know her. That’s a cool thing about mockumentary: You know way more about these characters than they know about themselves. It’s like who you are when no one’s watching. Sometimes you’re not ready to confront that person. Janine hasn’t even admitted that she has feelings for [Gregory]. The audience knows, but neither of these two characters have admitted it to themselves. So as of now, I don’t think that he has consciously played a part in her staying.

Abbott Elementary fans, what did you think of the season ender? Grade it below, then hit the comments!