The Flash‘s latest episode gave viewers a lot of new information to upload: the Black Flame that has been terrorizing Central City and seemingly feeding off of grief is none other than… Ronnie Raymond, Caitlin’s long-dead husband?!?

On the heels of the Black Flame’s skull-like visage confronting Caitlin and quoting some of dearly departed Ronnie’s greatest hits, TVLine spoke with series alum Robbie Amell about the nature of his latest encore, which kicks off this Wednesday at 8/7c on The CW.

Filed under “things he was able to freely talk about,” Amell with former scene partner Danielle Panabaker (as seen above) filmed some new Ronnie/Caitlin flashbacks that are sprinkled throughout this week’s hour, titled “Resurrection.”

“It was really fun doing those,” Amell avowed. “I hadn’t seen Danielle in ages, because when I was in Vancouver shooting [Prime Video’s] Upload and she was shooting The Flash last year, it was prime COVID time and we never had the opportunity to get together. So it was really nice to see her and see Grant [Gustin] and talk abut having families, because it’s been that long.”

And as any parent here knows, the experience can put some miles on you!

“Danielle and joked around about how we definitely didn’t look the same age we did when the flashbacks are supposed to take place,” Amell noted with a laugh. In fact, the flashback that opens this week’s episode is set a decade ago, in 2012, as it captures the future marrieds’ very first meeting at S.T.A.R. Labs.

“I thought that was really cute,” Amell recalled. “They did a good job of showing you the spark between them from that you didn’t see in Season 1. It was really charming.” 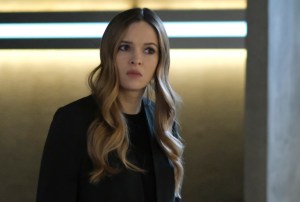 Onto the trickier stuff…. Amell deemed himself not suited to explain exactly how dead Ronnie evolved into the Black Flame. “That’s a good question, and people much smarter than me should be answering it,” he admitted. (Indeed, Caitlin with some help from Chester breaks it down for us this Wednesday night.) “But I’ve died three times on the show already — or was it four? — so if I’m able to come back that many times, this shouldn’t be that surprising.”

Yet while Caitlin finds the shocking reveal to be scientifically sound, others on Team Flash are moved to mull an alternate possibility. And that sets the stage for infighting amongst friends.

“Yeah, it’s tough to trust a giant black flame, skull-looking thing. It doesn’t really paint a cozy picture!” Amell (accurately) noted. “I would be a little skeptical if I were them.”