After hearing about Robyn’s ex-husband for more than a year, fans of The Equalizer will finally get to meet him on this Sunday’s episode (CBS, 8/7c), titled “Hard Money.”

Run the World‘s Stephen Bishop will guest star as Dr. Miles Fulton, a skilled surgeon who was married to the one-time CIA agent and is also Delilah’s father. Things get complicated when Robyn has to turn to her former spouse for help on a case she’s working on involving two women being hunted by thieves for witnessing a robbery.

As seen in these exclusive photos above and below, one of the witnesses gets shot, and Robyn needs Miles to help save the woman’s life. But by turning to him, Robyn will be forced to tell Miles that she’s been moonlighting as a vigilante and assisting those in need who can’t rely on the police. Viewers will also learn how well Miles knows Robyn and if he is aware that she used to be a government spy.

In Season 1, Miles remarried, and his new wife Kelly (Crystal Joy Brown) was shown with Delilah that same season when Robyn ran into them at a gas station while trying to save a wanted mathematician.

Miles is the latest ex-significant other to be introduced on The Equalizer. Back in March, fans met Dante’s former wife, Vanessa (Tawny Cypress), who worked with Robyn to find the NYPD detective when he was beaten and kidnapped by officers in upstate New York.

As for Bishop, his other small-screen credits include Agents of S.H.I.E.L.D., Imposters, Greenleaf and Being Mary Jane. 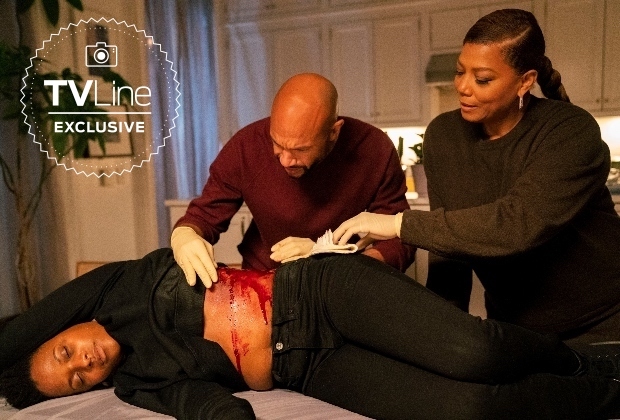 Are you excited to meet Robyn’s ex, Dr. Miles Fulton, on The Equalizer? Drop your thoughts in the comments.