One of 9-1-1: Lone Star‘s key couples called it quits on Monday — and it’s not the one we were worried about.

While much of the hour revolved around Carlos feeling that T.K. was giving more of himself to his new AA sponsor Cooper (aka “Coop”) than he was giving to his boyfriend, that situation actually resolved itself nicely. After seeing how important it is for T.K. to connect with someone who has also struggled with addiction, Carlos ultimately encouraged T.K. and Coop’s friendship, recognizing that it was in everyone’s best interest to do so.

If only T.K.’s father could handle his own relationship with that level of maturity. While Catherine was out of town for the weekend, Owen offered to babysit the hairless cat she still shares with her ex-husband, whom Catherine claimed was a dead ringer for Owen. When a much-older man showed up to drop off the hairless houseguest, Owen developed a theory that Catherine is attracted to older men because of her daddy issues — and for some reason, he thought it would be a good idea to tell her this. To her face. 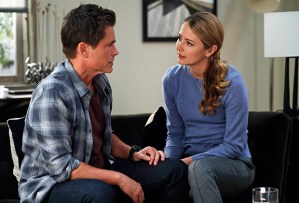 Owen felt pretty stupid when he learned that the man who dropped off the cat was actually Catherine’s ex-husband’s father, but the damage was done. Short of Owen doing some serious grovelling, his relationship with Catherine is up in smoke.

Meanwhile, Tommy ventured out on her first real date with a man since the death of her husband last season. Morris, a handsome member of Tommy’ grief support group, had everything going for him… including some very active tear ducts. He spent the entire meal sobbing about his wife, hence Tommy getting home at a tragically reasonable hour.

So, how are we feeling about this week’s Lone Star? Are you holding out hope that Owen and Catherine can patch things up, or will she simply join his long list of scorned exes? Drop a comment with your thoughts below.