Punches flew. Bullets flew. Hell, even cicadas flew en masse in the Season 11B finale of The Walking Dead. And by the time “Acts of God” reached the calm before the series’ next — and last — storm, we’d lost one minor protagonist and one major antagonist, creepy Lance had lost what was left of his patience, and two mortal enemies had called a truce. Read on, and we’ll go over all the highlights.

What's New on Netflix in August — Plus: Amazon, HBO Max and Others

‘YOU HAVE BIG BALLS, MAGGIE RHEE’ | Early on in the episode, knowing that Lance and his troopers would be back, Maggie, Hershel, Elijah and Marco (remember him?) left Hilltop to escort the boy to his sitter: of all people, Negan. “He doesn’t exactly trust me, you know,” Glenn’s killer pointed out. “But I’m starting to,” the widow replied. Negan had saved Hershel from the troopers at the apartment complex; she wouldn’t forget that — ever. A new understanding dawning between the longtime foes, Negan assured her, “I got you, and I got your boy.” Elsewhere, Daryl, Aaron and Gabriel were looking for an opportunity to take out the troopers with whom they were pretending to search for the remaining apartment dwellers. When at last the moment arrived, Gabriel was shot, and so was Aaron. But, being series regulars, their wounds were only of the flesh variety, allowing them and Daryl to dispatch the rest of the soldiers and ascertain Lance’s whereabouts from their doomed commander. 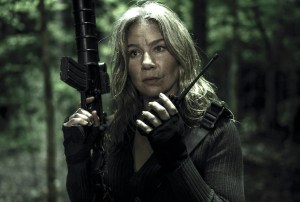 Returning to Hilltop, Maggie & Co. arranged for Lance’s troopers to get an explosive surprise once they entered Barrington House. But our heroes had hardly managed to get out a “hip, hip,” much less a “hurrah” before Leah had fatally shot Marco. (It’s never a good omen when a D player gets lines; he might as well have worn a red shirt on Star Trek.) When Lance complained to Leah that she’d gotten three of his men killed, the model employee shrugged it off. “Collateral damage,” she called the dead. Meanwhile, Maggie split off from Lydia and Elijah so that they could all lead troopers away. Soon, Maggie and Leah came face to face. Shots were fired, and Leah was hit — but again, not badly enough to stop her. She knocked Maggie out, then tied her up rather than kill her. The following morning, Maggie theorized that Leah thought making her “family’s” killer hurt the way that she had would take away the pain, etc., etc. But Maggie was really just killing time while she untied herself. Once free, she and Leah engaged in a brutal brawl, one that Maggie looked about to lose, had Daryl not shown up at just the right moment to put a bullet in his ex’s head. 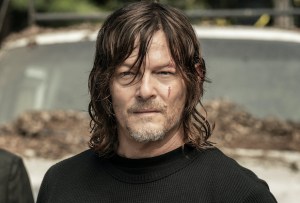 ‘I’VE GOT A WHOLE NETWORK READY AND WILLING TO RIDE AT DAWN’ | Just then, Lance and his troopers arrived on the scene. As always, shots were fired — a bullet even grazed Lance’s face, leaving him extra pissed. “Now,” he huffed, “we take it all.” As if that hadn’t always been his plan? Back in the Commonwealth, Eugene, seemingly having spent the night with Max, reaffirmed that she was still down with the risky plan to steal files from Pamela’s office. And though scared, Max remained on board. She wasn’t even slowed down by Sebastian, who would’ve realized she was up to something, were he not so utterly self-absorbed. That evening, Eugene and Max met with Connie, Kelly, Magna and Ezekiel, who reported that he had reinforcements at the ready. But the list of names and mystifying codes wasn’t enough for Connie to report on; they had to crack the code first. In the meantime, she’d just write about Sebastian’s heist. Surely, that would make the residents of the Commonwealth realize that their governor did not have their best interests at heart. (Sweet, naive Connie.) As the episode drew to a close, Max returned the pilfered file to its cabinet just in time for a pissed Pamela to show up and drop a (resistance?) newspaper on her desk with the headline “Pamela Milton Is Lying to You.” At the same time, troopers hung Commonwealth flags on the gates of Alexandria and what was left of Hilltop, and Lance flipped a coin, seemingly to decide the fate of Oceanside’s denizens.

So, what did you think of the Season 11B finale? Maggie and Leah’s brawl? Maggie and Negan’s truce? Grade the episode below, then hit the comments.