Alexander and Francis both want to win Charlotte’s heart on PBS’ Sanditon, but if Sunday’s installment was any indication, the road to love will be filled with slings and arrows.

The competition between the two men began when Alexander arrived at Lady Denham’s annual garden party and started talking to Charlotte. He took one look (OK, maybe two) at her from across the lawn and once again, the sparks began to fly. His niece Augusta told Charlotte she didn’t look like a governess, and Alexander laughed and said this was high praise considering the source. Francis noted the trio’s conviviality and gritted his teeth.

He then walked over and greeted both, making sure to add that he and Charlotte were “friends.” This turned off Alexander who abruptly excused himself and walked away with Augusta. Once they were out of earshot, Francis scolded Charlotte because she hadn’t heeded his warning, and Charlotte argued that Alexander had changed.

Charlotte later found Alexander and he barked that he wouldn’t have attended the party had he known she was so cozy and cool with the colonel. The governess said the two men’s history shouldn’t interfere with him spending quality time with his niece as she made her societal debut, and Alexander immediately wanted to know what Francis had told her about him. Charlotte didn’t bite and instead responded that the animosity between them was painfully obvious.

Alexander then calmed down and agreed to stay a little longer and keep his distance. However, the gentleman didn’t keep his distance from Charlotte and when she frowned about Alison’s refusal to listen to reason regarding William and his lies, Alexander said it’s hard to change a young woman’s mind once she’s formed an opinion. Clearly, he was talking about Charlotte’s perception of him in regards to what Francis had told her, and this made Charlotte blush. 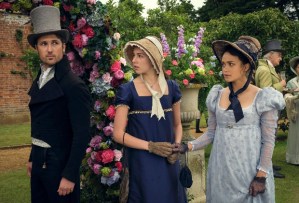 She in turn made Alexander blush when he remarked that he needed her to help him recall his social graces, and Charlotte replied she thought he’d hired her to help the girls, not him. Regardless of their quips — or maybe because of them — Charlotte and Alexander enjoyed talking to one another, and they chatted with an ease and comfort that made them both smile warmly. Lady Denham noticed the connection, too, and made sure to inform Francis that he had a rival. When Francis grimaced, Lady Denham fibbed and said she was talking about archery.

Later, when Augusta fainted because her corset was too tight, it was Francis who caught her. Alexander demanded that Francis take his hands off her and Charlotte helped her loosen up the ties inside. Augusta noted Francis’ admiration for Charlotte while they were alone, but Charlotte pretended as though she hadn’t noticed.

Francis, on the other hand, made it a point to get under Alexander’s skin by telling him Augusta resembled her Aunt Lucy, the first woman the two had fought over, and this infuriated Alexander. Soon after, the colonel challenged Alexander to compete in Lady Denham’s archery contest and Alexander begrudgingly agreed to impress Charlotte.

The two were neck and neck when Francis decided to turn Charlotte into a prop and have her shoot his final arrow. He also tried to get familiar and show her how to shoot, but Charlotte already knew how and hit the bullseye with panache. Sadly, when an awkward Alexander tried to get her to do the same for him, she tried and failed miserably because she’s not a circus act. Sigh. 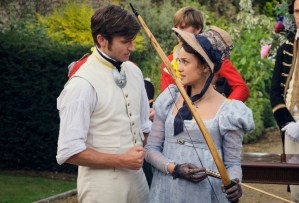 Francis extended his hand, to further rub salt in Alexander’s wounds, but Alexander refused to shake it. So the military man muttered, “All is fair in love and war, but then, I’ve known both and you’ve known neither.” An angry and embarrassed Alexander stormed off with Augusta and Charlotte chased after them. Alexander ordered Charlotte not to spend another moment in Francis’ company and Charlotte bitterly retorted that he paid her wages but didn’t own her. Francis came out and gave her an “I told you so” look and suddenly, Charlotte wondered if he was right about Alexander after all.

Elsewhere in the installment, Georgiana bested Lady Denham when she refused to eat her cake and gave such a rousing speech about slavery and her sugar boycott, none of the other guests wanted a slice either. Some time later, Georgiana and Charles nearly kissed, but Mary and Ms. Hankins stopped them.

Alison eventually learned the truth about William the hard way when she nearly drowned and he couldn’t save her. The two had been in a boat and when William proposed marriage, Alison got so excited she stood up and accidentally fell in the water. Declan had to save her and when she came to, Alison yelled at William for being a lying coward and at Declan for not giving her the facts. Will anyone find love in this beach town?

What did you think of the latest installment of Sanditon and whom do want Charlotte, Alison and Georgiana to choose? Drop your thoughts in the comments.