Well, to paraphrase Game of Thrones, if you thought Killing Eve would have a happy ending, you weren’t paying attention.

Sunday’s series finale did see Eve and Villanelle mend fences and join forces, embarking on a giddy road trip together — didn’t The Human League’s “Don’t You Want Me” just sum up their relationship perfectly? — and sharing a kiss before setting their sights on The Twelve. They tracked the shadowy cabal down at a secret meeting amid a wedding on a riverboat, and Villanelle gleefully slaughtered The Twelve’s leaders as Eve got roped into performing the wedding ceremony. Her words doubled as a declaration of her feelings for Villanelle, too: “Relationships are a lot of work… The beauty in your relationship will be found in the ways you reunite.”

So they lived happily ever after, right? Well, not quite. As Eve and Villanelle celebrated their victory on the boat’s deck, a sniper bullet pierced Villanelle’s flesh, followed by several more. She fell into the water, and though Eve jumped in to save her, Villanelle’s lifeless body was pulled away by the current, and Eve was left screaming to the heavens as we learned Carolyn had ordered the hit (!), with the text on the screen announcing: “The End.” Well, then!

After we recovered from all that and picked our jaws up off the floor, TVLine reached out to lead writer Laura Neal to break down that roller coaster of a finale. Read on for Neal’s explanation of why Villanelle had to die, why it doesn’t matter who actually pulled the trigger and what was behind Eve’s final scream. 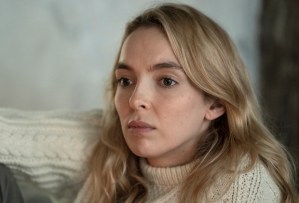 TVLINE | So we almost got a happy ending, but then Villanelle is gunned down and killed in the final minutes. Was there ever a possibility that Eve and Villanelle could live happily ever after? Or was this always meant to end in tragic fashion?
We discussed lots of different versions of the ending, so we certainly discussed an ending where they both live happily ever after. But our problem was that we couldn’t really imagine them doing so. [Laughs] We couldn’t imagine a world where Eve and Villanelle could exist in domestic bliss for very long. I think the way we tried to explore that is that we put them in quite a lot of domestic situations in Episode 8 itself. So it’s almost like lots of the story is them trialing their relationship in different formats and testing it and seeing how it works. And I think they come to the conclusion, and then I hope we as an audience come to the conclusion, that they are fated for something a little bit more explosive — which is what happens.

TVLINE | Did you ever consider killing Eve off, too?
Yep, we did have a version for a while where — not written, not at the script stage — but we discussed Eve dying and Villanelle surviving. It just didn’t feel very truthful. It didn’t feel right for us. It felt right that Eve has this rebirth and is allowed to go on and forge a new life for herself with everything that Villanelle has given her. And it also felt right for Villanelle’s story to end as it does. She’s somebody who is sort of forged in death and destruction, and part of her loves that as well. We see that when she’s killing The Twelve. That’s her place, that’s where she belongs. So it felt appropriate that she comes to an end in that way as well. But also, in my head, it is a happy ending for Villanelle in some respects, because she gets what she wants, which is that she demonstrates that she’s changed, and she does this thing for Eve that allows Eve to go on and live her life. Actually, that’s a huge thing for Villanelle, and I think she ends triumphantly, and that’s the thing that we were always really keen to make sure that happened.

TVLINE | Yeah, I could see that as a happy ending for Villanelle because she was able to take down The Twelve and find happiness with Eve, however briefly.
Exactly. That’s exactly how I hope the audience looks at it as well. And for me, there’s a sense that she doesn’t really die. She just sort of ascends to a higher place. I think there’s a nod in the visual references to the visions that Villanelle sees in Episodes 1 and 2, and we sort of see a hint of that in the underwater scene at the very end. So hopefully, people can see the line I’m drawing between the religious iconography that Villanelle conjures in 1 and 2 and the way she ends.

TVLINE | Eve and Villanelle do get to have that fun road trip together. We’ve been waiting for four seasons for them to have time to themselves and not have to be running around or chasing each other. It was nice to be able to see that.
Yeah, totally. It felt really important to see their relationship dynamic in a way that I imagine both of them have imagined or have asked themselves the question: “Could it work between us?” And then to have the space to trial that out… I think it’s quite unusual in this show to have that space, both emotionally and in terms of the plot, to have them come together without any distractions and without any other characters there and just have this space, emotional and geographical, for them to exist in each other’s company and really test out what that’s like.

TVLINE | The “Don’t You Want Me” song that came on the radio during the road trip: It felt like that’s Eve and Villanelle’s theme song. How did you guys decide on that song? Did you always have that in the back of your mind, that you wanted to play that at some point?
We had a couple of songs at that moment. We always knew it had to speak in a sort of cheeky way for the nature of their relationship. There are a few contenders, but that one just felt exactly right. Like, as soon as we heard the lyrics, it was like, “That one.” And also, it’s just a banging track. 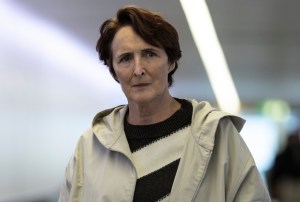 TVLINE | So we know Carolyn ordered the hit, but who actually pulled the trigger? It wasn’t Pam, was it? Because she had already quit. Or does it even matter?
I don’t think it matters. I think the thing that matters is that it’s Carolyn who’s giving the orders, which is the thing that she loves to do. Pam rejects the idea of working with Carolyn, and we see her reject that in the scene that they have opposite MI6, and for me, that’s Pam’s happy ending. It’s her realizing that she’s not cut out for this world. At the point where she decided to commit herself to the world, it was really her only option of escape, and now she’s learned that there are other options. So for me, that’s sort of Pam’s happy ending. I think people can decide who pulled the trigger. In my mind, it doesn’t really matter who pulled the trigger. I think, you know, it’s just someone with a gun, sniper-wise, hiding out on Tower Bridge.

TVLINE | On Carolyn’s end, was this just an effort to try to tie up loose ends? Because Villanelle was sort of a wild card that she could never really control.
I think it’s about ending the story that Carolyn began, and Carolyn wanting to have that power. She was the one who brought Eve and Villanelle together, and now she’s going to be the one to tear them apart for good. I think there’s something very Carolyn about deciding to do that. But also, I guess more practically, it’s about Carolyn buying her way back into MI6 and sort of regaining her crown, I suppose. I think she’s somebody who needs that status. We see her status-less at the beginning of the [season], and I think she ends with her status regained. In some ways, it’s a cyclical journey for her, but I think she has to win, Carolyn, and I think she can say at the end that she’s won. 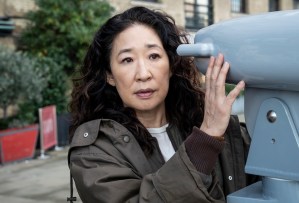 TVLINE | We don’t get to see what happens to Eve. The last thing we see of her is her thrashing in the water and screaming. Did you talk about where she might go from here, or did you always want to leave it unresolved?
We spoke about it loads, but we spoke about very particularly the nature of that scream and the nature of her emerging from the water. I had lots of discussions with Sandra [Oh] about that moment, and also with Stella [Corradi], the director. Because for me, it felt really important that that scream be a scream of survival. It’s like, there’s a triumph in that scream. It’s like, “I survived. I’ve got new life. I’m going to go on, and I’m going to live, and I’m going to live well,” rather than a scream of loss or grief or anger. And I think it’s all of those things as well. But I hope the defining feeling that people have when they’re watching her scream like that is that it’s a kind of release of everything that’s come before and a welcoming in of the next stage of her life.

TVLINE | The way the episode ends, it’s so abrupt. It’s a real gut punch for the viewer. Did you always want to have it lead up to those final minutes and then just pull the rug out, and that’s it?
Yeah, I think there’s a kind of a tonal continuity for Killing Eve ending in that way, especially with the titles coming up, saying “The End” like that. We wanted to make sure we were still, even though it’s the very final scene, existing in the same tonal world as Killing Eve has always existed in, which is a bit tongue-in-cheek, which is a bit self-aware, which doesn’t take itself too seriously. So that was part of the intention there. And I think it’s always better to leave people wanting more.

Alright, Killing Eve fans, it’s your turn: Grade the finale — and Killing Eve‘s final season as a whole — in our polls, and then hit the comments to share your thoughts.