THE SHOW |  Hulu’s The Dropout

THE PERFORMANCE | Much has been made about the deftness with which Seyfried replicated Elizabeth Holmes’ trademark voice — and with good reason. The Big Love vet nails her alter ego’s performative, authoritative baritone.

But the real genius of Seyfried’s work in Hulu’s limited series is in how she captured the disgraced Theranos founder’s reckless ambition, unrelenting denial and, in this week’s series finale, her mounting paranoia leading to the inevitable implosion.

Witness the scene early into Episode 8 when Elizabeth clumsily attempts to slither out of having to run interference with the impromptu lab inspector. “Uh… uh… one of us should talk to him,” Seyfried stammers and stutters, infusing Elizabeth’s well-honed grifter energy with a layer of desperation. When the Silicon Valley wunderkind unconvincingly insists to her No. 2 Sunny (an excellent Naveen Andrews), “I’m not afraid of, uh, talking to him or, uh, answering his questions,” Seyfried makes us see the crack forming in Elizabeth’s armor of utter and complete BS.

Later, as Elizabeth is setting the stage for Sunny to take the fall for Theranos’ woes by gaslighting her business partner-slash-lover, Seyfried’s delivery is so earnest and believable, it’s borderline terrifying. The actress then takes it to another pathological level when Elizabeth feigns concern for his well-being. “If you did something wrong, you should tell me,” she pleads, Seyfried imbuing the words with faux compassion. “What did you do, Sunny… maybe I can help you?”

When Sunny nonetheless assures his soon-to-be-ex that in spite of whatever legal ugliness lies ahead for them, “I won’t hurt you,” Seyfried allows a morsel of humanity to bleed through Elizabeth’s emotionless expression. And, for a moment, you feel for the swindler.

Empathy comes again in the episode’s closing moments when Elizabeth, unable to bottle up all the pain and rage she has built a career on concealing, explodes outside her now-vacant headquarters. Ahead of the quasi-exorcism, Seyfried tensed up her face and arms, perfectly dramatizing Elizabeth’s efforts to ward off the looming outburst. It was a catharsis at its most hard-fought, and Seyfried captured that inner struggle masterfully. 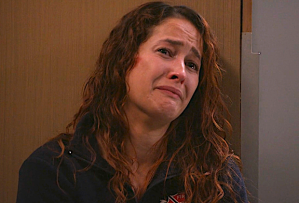 HONORABLE MENTION | With a crushing openness, Jaina Lee Ortiz led us in Thursday’s Station 19 over jagged, painful terrain. First, she brought a visceral urgency to Andy’s fear and disorientation following her assault. Then, the actress stiffened her spine to play the captain’s resentment at being questioned by cops eager to poke holes in her story. Ortiz could go deeper, though, and did. In a stunning, wordless scene, as Andy learned she’d accidentally killed her attacker, her portrayer’s face told us all we needed to know about the shock being piled atop her trauma. Finally, Ortiz gave us a fleeting glimpse of Andy laughing with her friends, as vital and strong as ever, as well as a haunting vision of her more shattered than we’d ever seen her. 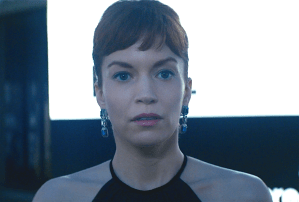 HONORABLE MENTION | Apple TV+’s dystopian workplace thriller Severance just blew our minds with a roller coaster of a season finale, and it wouldn’t have worked without Britt Lower‘s fiery, complex work as Helly. Always the most rebellious of the Lumon employees, Helly discovered that — spoiler alert! — in the outside world, she’s actually the CEO’s daughter and the heir to Lumon’s family legacy. Lower played the stunning reveal with remarkable precision, with Helly slowly putting together the pieces while not betraying the truth to her corporate peers. (She was also chillingly upbeat in her scenes as “Helena.”) When Helly uncorked the truth about Lumon’s severance procedure in a torrent of rage, Lower finally let a season’s worth of frustration and despair come spilling out to the surface. We can’t wait to see what Season 2 has in store for us, especially with Lower uncovering new layers to Helly like this. 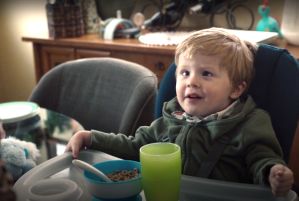 HONORABLE MENTION | Toddler actors usually don’t have to do more than look cute and keep quiet in order to be successful in a scene. But in Tuesday’s This Is Us, Johnny Kincaid — who, like his character, has vision impairment — seriously raised the bar for his fellow tiny thespians. Throughout the entire episode, the little boy conveyed genuine emotion as Jack witnessed the downfall of his parents’ marriage. His glee at spending Saturday in the park was palpable. His sadness during the scene in his room with his grandmother was very believable. All in all, it was just a super-solid performance… from someone who probably just graduated from using a sippy cup! We’re highly, highly impressed. 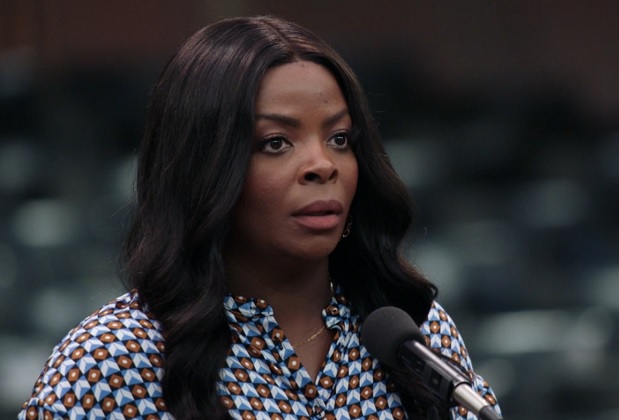 HONORABLE MENTION | As the seemingly superficial Principal Ava, Abbott Elementary‘s Janelle James has been a scene-stealing standout all season, thanks to the actress’ impeccably zippy comedic timing. In this week’s episode, Ava had to make a presentation in front of the school board to save Abbott’s funding, as well as her own job. Without Janine and Gregory’s assistance, Ava fumbled her way through the slides, allowing James to express a hilariously flummoxed side of the typically over-confident principal. But Ava also refused to be dismissed like “Lil Mama at the VMAs” and rose to the occasion, launching into a speech about the unconventional ways in which she uses school funds to help the students. James not only delivered the zingers that we’ve come to expect from her, but she also showed us that Ava truly cares about the kids at Abbott Elementary.