Season 2 of Hulu’s Woke opened with a well-intentioned liberal white woman who literally woke up and said Breonna Taylor’s name. She read all the right books and even flipped off the cops while walking down the street.

And then it happened. Keef got on the bus and sat down next to this very same woman, and she grabbed her purse because she thought he might steal it. So much for her woke-ness. A white man, who was also on the bus, recognized Keef and praised his work, and suddenly the woman relaxed. She then told the artist she had one of his comic strips on her fridge, right next to a picture of Vice President Kamala Harris.

The man said Harris was “a cop,” and the two started arguing about who was more woke, him or her, until Keef politely got off the bus and left them behind. The beauty of Woke is that as the episode unfolded, it became clear that Keef — and most of us — aren’t so different than that woman. We mean well, but everyone has blind spots when it comes to being socially conscious.

At first, Keef thought he could keep repeating his new platitude: “Without the black lines, the white page is nothing.” But he soon realized his cluster of supporters and fans were growing tired of his catchphrase and wanted more. What that “more” would look like became increasingly confusing when a protest in the park asked him to speak. 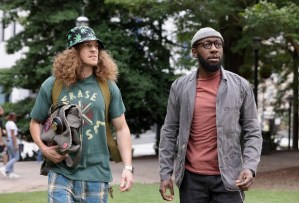 Keef was going to use his phrase one more time until the organizer told him they’d streamed a video of him from Juneteenth saying the same thing. Ayana, meanwhile, teased Keef about the scrutiny he would receive now that he’d made a name for himself as an activist. Ayana’s first date (there were three) compounded the pressure when she noted her disappointment in Keef for not addressing San Francisco’s Native American Ohlone tribe in his work.

More voices chimed in and wanted Keef to address everything from the prison-industrial complex to transphobia, food insecurities, school inequalities and climate control. This freaked out Keef, who tried to run away from the protest until Clovis — who looks amazing now that he’s ripped — stepped in as the voice of reason. 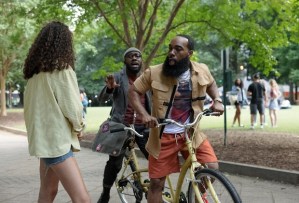 Clovis told Keef that he could fake it until he figured out what his new platforms and platitudes were by speaking in a vague but uplifting way, much like Common. Keef did exactly that, and Common even retweeted his speech, which said nothing and garnered him thousands of new followers. The whole experience disillusioned Gunther, who was hoping to get into a fight with the police. A tickled Ayana, on the other hand, encouraged Keef to make the most of his newfound fame.

Ultimately, Keef decided to leave it up to the people to help him take down the man — or whomever — a decision that will come back to haunt him as Season 2 plays out.

What did you think of the Season 2 premiere of Woke, and are you pleased with the direction the comedy is taking? Grade the opener in our poll, and drop your thoughts in the comments.