For instance, star Samuel L. Jackson’s dementia-addled titular character didn’t get to retain the memories and mental agility he regained through an experimental drug. But he did get to make peace with his past, avenge Reggie’s murder and financially protect Robyn so that she could oversee his estate and go on to do great things. Although Ptolemy’s mind wouldn’t allow him to realize all that he’d accomplished, he did seem contented.

Before Ptolemy shot and killed Alfred, the man who violently snuffed out Reggie’s life and threatened to do the same to Robyn and Ptolemy, the nonagenarian indulged in the simple pleasures he used to daydream about with Sensia. Instead of catching the bus, Ptolemy hired a chauffeur to drive him to a museum so he could admire the beauty of art. He also visited a park and talked to the ghost of his childhood girlfriend, Maude, who died in a fire and appeared as his guide to the afterlife.

He asked the driver to blow his horn shortly after Alfred arrived, and the driver did so and refused to take Ptolemy’s money as payment for the favor. That horn blowing really paid off because it distracted a menacing and knife-wielding Alfred long enough for Ptolemy to get his gun out of his pocket and defend himself. 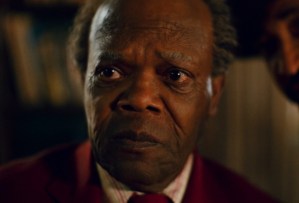 The first few times Ptolemy pulled the trigger, there were no bullets, and just when Alfred thought he’d gained the upper hand, Ptolemy kept pulling until a fateful slug shot out and lodged itself in Alfred’s gut. The ghosts in Ptolemy’s head told him to follow Alfred, even though he didn’t need to follow him. There was a recording of Alfred’s confession in the elderly avenger’s apartment, and Alfred eventually died in the street from the wound.

The crack-addicted woman who used to harass and bully Ptolemy even swiped Alfred’s wallet for good measure. Meanwhile, the police rolled up on Ptolemy just as he stood over Alfred to make sure he was dead, and there was a very tense moment where it felt like the cops might shoot and kill Ptolemy because he was still holding the gun.

Thankfully, the officer who had told Ptolemy about Reggie’s cold case was called to the scene and managed to talk Ptolemy into safely surrendering his pistol. Ptolemy was then placed in a state-run mental hospital, and six months later, Niecie, Hilly and Reggie’s widow Nina (who had rekindled a romance with Alfred out of habit and fear) fought Robyn for the rights to govern Ptolemy’s estate.

Armed with lies and greed, the trio tried to make it seem like Robyn had taken advantage of their uncle, despite his explicit wishes and well-prepared legal documents. Ptolemy, at his most lucid, knew Niecie would try to fight his desires in court, so he recorded a video that not only showed him as cognitively sharp but spry and loving. The judge ruled in Robyn’s favor, but Niecie vowed to keep fighting. Wow.

Until then, the judge’s ruling allowed Robyn to see Papa Grey for the first time in six months, and although he did remember her, his dementia erased almost everything else. Robyn was of course saddened by Ptolemy’s mental regression, but also grateful that he was still alive. So she did the best she could in that moment and hugged him lovingly as tears dampened her face.

What did you think of the series finale of The Last Days of Ptolemy Grey, and did it make you cry? Grade the closer in our poll, and drop your thoughts in the comments.