61st Street is not an easy watch — and that’s the point.

The AMC drama, which will debut with two episodes this Sunday at 10/9c, centers on Moses Johnson (played by Doctor Who’s Tosin Cole), a promising Black teen who is wrongfully swept up into Chicago’s infamously corrupt criminal justice system. Courtney B. Vance stars as Franklin Roberts, the defense attorney who takes on Moses’ case, and whose push for change intensifies over the course of the show.

Spanning two eight-episode seasons, the series is a gut-wrenching look at how one incident affects all aspects of the community, from Moses’ mother Norma (Andrene Ward-Hammond) and younger brother Joshua (Bentley Green) to the police officers and prosecutors investigating and the activists seeking justice and accountability. 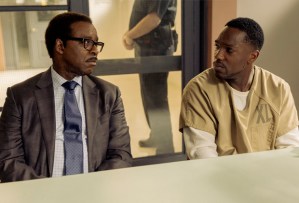 In the below conversation with TVLine, executive producer and former Chicago police officer J. David Shanks (The Chi, Seven Seconds) speaks on the show’s unflinching approach and what he hopes viewers take away after watching.

TVLINE | Most people outside of Chicago probably won’t recognize the significance of 61st Street. Can you talk to me about why it was important to use that name for the show?
We knew we wanted to be in the Woodlawn Community, and 61st Street is where the Invisible Institute resides. With the inception of the show, [series creator] Peter Moffat met Jamie Kalven [the investigative reporter who forced the city of Chicago to release the video of Laquan McDonald, shot 16 times by a white officer], who told him about the Invisible Institute. After a few visits, that’s where Peter landed with the title of the series.

TVLINE | Police procedurals often rely on cops as consultants, so it’s interesting that you also included advocates who live in Chicago.
We wanted to make sure we heard from everybody, and a big portion of what the Invisible Institute does is document the encounters of young people with law enforcement. As you get deeper into the series, we replicate what it looked like when kids are giving their testimony about negative encounters with law enforcement.

White police officers don’t live in these communities, and Black police officers live in these communities more times than not, so your approach to policing is going to be a little different. [With Black] police officers, you’re sort of a man with no island because you’re never fully embraced by the majority white department that you’re working for. You’re ostracized by your people in the community who look at you like you’re an Uncle Tom and a sellout. It’s a tough place to be as a Black cop. We got a lot of input from working police officers on the street about the way things are and the way things go. I was also able to rely on some of my own experiences.

TVLINE | This series is very heavy, and it just doesn’t let up. Can you talk to me about the tone and what you were trying to say with that?
I really want people to understand that it’s not about Black trauma at all. We know this world, we know the story, it happens to us, and it affects us, ad nauseam. We use the [inciting incident in the pilot] to pull you into the story in a very visceral and gut-wrenching and unflinching way. We want the circumstances to be dire, like, ‘Oh my God, this boy’s life is going to be over.’ It’s the fragility of Black excellence that we’re really trying to tap into. I just want to emphasize that it’s not about re-traumatizing our community over and over again. We use the pilot as an inciting incident for the entire series, and that sets the table for a bigger conversation.

What we want people to do is continue the conversation. It’s really easy to the watch these things happen. You barely flinch at that anymore because it’s such a common occurrence. But for us to really deal with that, we can’t say, ‘That OK. That’s what it is, and that’s what’s on the news.’ What we aspire to do with 61st Street is to paint a picture and create a dire situation for a young man, something that we as a community can relate to, and then unpack that and talk about it over the course of 16 episodes. Franklin’s objective becomes bigger as the series goes on, and it’s really about dismantling those systemic institutions that perpetuate the problem. That’s a lofty goal, and it’s one that a lot of people would look at like, ‘It’s pointless.’ But Franklin is determined. 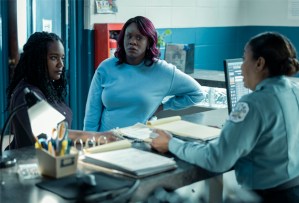 There’s a segment of America that does not see this or doesn’t really understand it. When Mamie Till made the decision to allow Emmitt Till’s photo in the coffin to be seen in Jet Magazine, that’s probably the first thing that comes to mind where people were like, ‘Oh my God! This is happening. They did that to a young Black man.’ The incident on the Edmund Pettus Bridge… That cameras were rolling, and people in a peaceful march were attacked by law enforcement and captured on video for the nation to see. Most recently was the brazen murder of George Floyd. Now that we saw that, there’s a segment of America that is like, ‘Oh my God. I can’t believe what I just saw,’ because they live in these insulated bubbles.

61st Street is a complete departure for AMC. We’re tapping into an audience that doesn’t see this or chooses not to see it, or they live in an insulated world where it doesn’t affect them. They’re going to [with this series], and it’s about us reaching them. Peter Moffat allowed us the use of his platform to tell a story that affects a marginalized community. We need more white people that are willing to lend their voice to this fight. Those are the purposes [of 61st Street]: to continue the conversation and to build our base of advocates that want to help us really move towards significant change.

TVLINE | In this show, we’re seeing on-the-ground activism led mostly by Black women. How important was it for you to portray that on screen?
What we endeavor to do is remain true to that authentic storyline that’s really happening in our community. It’s mothers who are the protectors, who stand in the gap for the survival of family. It’s mothers who were pushing kids like a Moses Johnson, waking him up at the crack of dawn for practice and making sure he’s doing his schoolwork, making sure to be staying out of trouble, working two jobs to provide for the family. It was important for us to portray Norma Johnson and Martha Roberts [played by Aunjanue Ellis] in this light where you see two very diverse, strong Black women fighting a battle — one outside of the system and one who has chosen to become a part of the system to dismantle it from the inside.

TVLINE | We know Courtney B. Vance is a legend, but what specifically made him the right man to carry this story as Franklin Roberts?
Courtney B. Vance is the ultimate “number one” on the call sheet. The second that you meet him, there’s almost a reverence that you have to pay him because of his body of work. His manner is so disarming, and any apprehension that you feel about meeting him is stripped away. He makes you feel like you are his family… He’s a good man. He’s not jaded by this industry. He’s not pretentious. He’s none of that. He’s Courtney B. Vance, and everything that you think that comes with that is him and more. I can’t imagine anybody else playing Franklin Roberts. There are some other actors that we could have attached, but we were fortunate that we put Courtney’s name out there first and were able to land him.

TVLINE | It’s clear that this show means a lot to everyone involved. What do you hope viewers take away after watching it?
More than anything, that we still have a lot of work to do. It’s 2022 and we just passed an anti-lynching law. To quote Supreme Court Justice Ketanji Brown Jackson, “persevere.”

The divide between people with resources and people without resources is only getting wider, and what is that doing to our country? In a city as culturally and ethnically diverse as Chicago, it is still one of the most segregated cities on the planet. Black people live where the Black people live, and white people live where the white people live. Roosevelt Road, which divides the city between North and South Side of Chicago, is like two completely different cities, and it shouldn’t be that way.

As far as policing and the criminal justice system and police reform, there’s still a lot of really open wounds that are festering right now. We have to figure out a way to have honest conversations about training, about how to deal with the community, about sensitivity. We have to do better with these gun laws. When I was on the police department, it was a felony to carry a gun in Chicago. They’ve moved away from that to concealed carry permits that any citizen can apply for. So now you have people running around with pistols in their waistbands. All that’s going to do is exacerbate the problem, in my opinion. We have to continue these conversations.

61st Street, and stories like it, are not the only story that the Black community — or we as artists and filmmakers — are capable of telling. This is the platform that we’ve been given, and this is an opportunity for us to say something with our work. My sincerest hope is that this opportunity leads to other opportunities to tell more stories and to pull more marginalized artists onto the playing field so we can tell other stories. But right now, the mission of 61st Street is to continue the conversation. We need people to keep talking about it so we can get to an answer.