The Lincoln Lawyer will park his titular ride on your screens on Friday, May 13, when Netflix premieres David E. Kelley’s take on novelist Michael Connelly’s legal eagle. 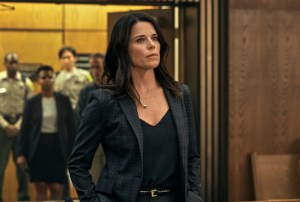 The 10-episode first season, which is based on the second book in Connelly’s Lincoln Lawyer series, The Brass Verdict, follows Mickey Haller, an iconoclastic idealist who runs his practice out of the back seat of his Lincoln Town Car as he takes on cases big and small across the city of Los Angeles.

Manuel Garcia-Rulfo (Goliath, From Dusk Till Dawn: The Series) fills the title role, which was played in the 2011 feature film by Matthew McConaughey. 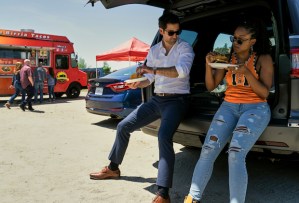 The series also stars Neve Campbell (Party of Five) as Maggie, Mickey’s first ex-wife and a Deputy District Attorney known to colleagues as “Maggie McFierce” (Marisa Tomei played the role on the big screen); Becki Newton (Ugly Betty) as Lorna, Mickey’s second ex-wife who works as his office manager; Jazz Raycole (Jericho) as Izzy, a client of Mickey’s and a former addict who is charged with grand larceny to support her habit; and Angus Sampson (Fargo, Shut Eye) as “Cisco,” a former biker gang member who now helps out Mickey as an investigator/bodyguard.

Will you hitch a ride with The Lincoln Lawyer when it debuts?