A foreboding shadow loomed over Wednesday’s Snowfall from the moment Louie secretly met with Teddy to buy cocaine from him directly.

Not only was Louie going behind Franklin’s back, but unbeknownst to her, she was putting herself and Jerome in more danger because Teddy is not the one to trust. Oso’s face said as much and more, especially when she mentioned the Colombians, whom Teddy is clandestinely supplying despite the fact that they’re Franklin and his family’s biggest competitors.

After wrapping up her duplicitous act, Louie focused her energy and attention on Jerome and their fast-approaching wedding day. The two even invited Skully as both a gesture of good faith and a way to mix business and pleasure. This backfired when Skully spiked the chocolate fountain at the wedding with LSD and everyone who partook in the chocolate-covered strawberries started tripping.

The only ones who didn’t get dosed were a very pregnant Veronique, because she felt nauseous and left immediately after the ceremony, and Wanda. Because Wanda is allergic to chocolate, she was stone sober and ended up helping everyone safely come off their highs. The only person she couldn’t help was Franklin, who had the most adverse and eye-opening reaction to acid of anyone. 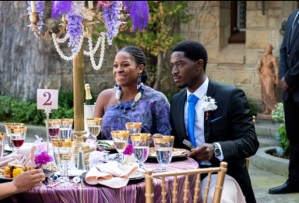 Dude cursed out his mom (who was having her own LSD journey), had a lengthy conversation with the ghost of White Rob, experienced an even longer chat with a younger, pre-pusherman version of himself and paged and threatened Teddy. The biggest and most important question is: Will Franklin remember what he said to Teddy? Because things are only going to get worse. A vision of Veronique also appeared and warned Franklin that everyone he loves will betray him. Yikes!

One of the few good things that came out of Franklin’s hallucinogenic phase is that when he came back down to Earth, he had an overdue heart-to-heart with his bestie Leon. The two talked about their lives and the business, and Franklin thanked Leon for looking out for Cissy by putting her safely in the back of his car as she slept off the drugs. 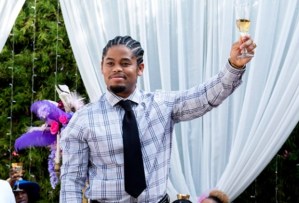 But Franklin’s moment of tranquility proved short-lived when he danced with Queen Louie, the bride, and she told him, in so many words, that she’s going rogue and the wall he built around his empire was about crumble.

As a nod to The Godfather Part II, Louie kissed Franklin full on the lips. Instead of Franklin, the show’s Michael Corleone, exposing her as his betrayer, Louie became Fredo and exposed herself. Twist!

As Louie was saying and doing all of this, a cutaway shot showed Buckley rolling up on Kane to kill him, per Louie’s orders.

Here’s hoping Buckley shoots to kill, because Kane knows who Veronique is now, and if he lives, revenge will almost certainly be bloody, swift and tragic. So much for that peace treaty.

What did you think of the latest Snowfall, titled “Celebration”? And who are you worried about the most? Drop your thoughts in the comments.