Franklin’s story probably won’t have a happy ending on Snowfall, but it will definitely have a conclusion: FX has renewed the drama series for a sixth and final season.

The show is currently nearing the end of its fifth season, with the finale set to air April 20.

“I couldn’t imagine telling this story anywhere but at FX,” said star/producer Damson Idris in a statement. “I’m incredibly proud of the history we have all made. Especially the impact Snowfall has had on the culture. Very rarely does a TV show get to the sixth-season mark and saying goodbye to Franklin Saint will be heartbreaking. But the family and relationships I’ve made on this journey will last a lifetime. I know John Singleton is looking down smiling proud.”

The sudden and tragic death of basketball star Len Bias in 1986 has played out in Season 5 of Snowfall as the rock cocaine epidemic made front-page news and became the target of lawmakers on both sides of the aisle. A militarized Los Angeles Police Department, in turn, decided the only way to deal with America’s dangerous drug epidemic was through force against Black and brown people. 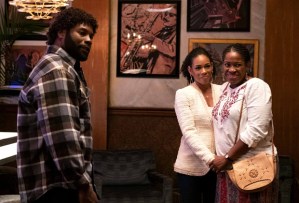 That’s when the streets of South Central Los Angeles became ground zero in the war against drugs, forcing the Saint family, which now includes Franklin’s pregnant girlfriend Veronique, to navigate the police, warring gangs, the CIA and even one another.

“FX first partnered with legendary writer/director John Singleton and the rest of the creative team six years ago to pursue their vision for an ambitious, powerful drama about the explosion of the crack epidemic of the early 80s,” Nick Grad, FX’s president of original programming, added. “Today, as the fifth season of Snowfall reaches new heights of acclaim and viewership, there is no question that this series has become an FX classic drama. We are thrilled to order a sixth season that will enable Dave Andron, Walter Mosley, and the rest of the producers to bring Snowfall to a climatic finale showcasing the brilliance of everyone involved, from the stellar cast led by Damson Idris, to the writers, directors, artists and crew.”

Are you sad about Snowfall ending in Season 6 or are you hoping it ends with a bang? Drop your thoughts in the comments.