Fear not, Bridgerton fans. Colin and Penelope, aka “Polin,” will be together. It’s just going to take longer than expected, according to the stars behind the characters, Nicola Coughlan and Luke Newton.

Things seemed bleak at the end of Season 2 when Penelope overheard Colin telling his friends he could never be romantically interested in the youngest Featherington daughter, even though the two had danced that night.

“Colin doesn’t see what is right in front of his eyes,” Newton tells TVLine with a sigh. “He’s got this amazing connection with this young woman, but his judgment is so clouded about feeling like he has to be a man and find his purpose, that he’s put her in the friend zone. He’s ticked off his ambition, which was traveling, and now he’s trying to figure out what’s next. Everyone else has things going on, and he’s distracted by ambition. It’s really hard to defend Colin because there are moments where even I’m like ‘Bro, you’re just being a d–k right now.'”

Coughlan argues Colin is simply acting his age, and now that her character has heard how he feels, Penelope can gain some perspective.

“Colin was high on life as the conquering hero, in his mind, because he thinks he saved the Featheringtons,” Coughlan explains. “He genuinely hasn’t thought about Pen in that way, and maybe now she will no longer treat him like he’s a god. She’s his little sister’s best friend. In the books, they don’t get together for another 10 years.” 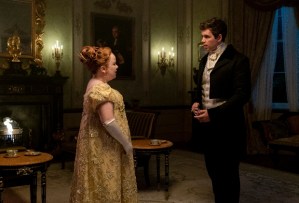 Executive producer Shonda Rhimes has made it clear that Season 3 won’t follow Book 3, An Offer From a Gentleman, to the letter and will likely involve multiple Bridgerton love stories instead of Benedict’s alone, as Julia Quinn’s novel did. This could mean that “Polin” will be one of those romances in addition to the still-burgeoning love affair between Kate and Anthony, aka “Kanthony,” as star Simone Ashley recently confirmed to Deadline.

There are also theories that bookworms Eloise and Theo, aka “Theloise,” could reconnect and officially become a couple. This is also a departure from Book 5, To Sir Phillip, With Love, where Eloise marries Sir Phillip Crane. In Season 2, Phillip is married to Marina Thompson. (The character of Theo doesn’t exist in the books.) 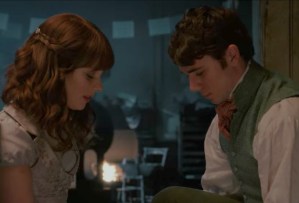 “Theo and Eloise are really cute,” says Claudia Jessie, who stars as Eloise and doesn’t want her character to marry anyone. “She is a bit of a maverick, isn’t she? I think it’s more interesting that she spent time with Theo unaccompanied and then continued to do it and didn’t care. I love that about Eloise and what the writers are doing.”

Even though Season 3 is still being written, Jessie says she wants Eloise to keep being pragmatic, even in matters of love.

“Eloise develops a crush, and I love that she doesn’t suddenly turn coy,” Jessie observes. “She’s like, ‘Listen, mate, I think about you all the time.’ The writers haven’t made her feelings for Theo cutesy. She’s met someone whom can have a good back-and-forth with, and they’re made for each other. That’s the type of relationship you’d expect Eloise to have as her first romance.”

Do you want “Theloise” to become a permanent fixture? What about “Polin”? Drop your thoughts in the comments.