Captain Pike and the gang will seek out new life and traverse the unknown in Star Trek: Strange New Worlds, arriving this May on Paramount+.

On Sunday, the streamer unveiled a new extended trailer for the forthcoming series, which you check out above. The video teases plenty of action, a few awkward encounters and some unexpected Spock smooching. But who is on the other end of that lip lock?

In Star Trek canon, the half human/half Vulcan was betrothed to T’Pring, who later chose to marry someone else. He also became infatuated with Nurse Chapel while under the effect of Harry Mudd’s love potion.

Paramount+ also released a new photo — see below — of the crew in action. 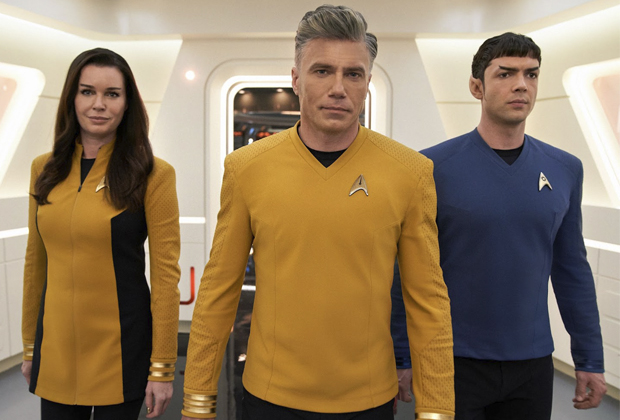 Strange New Worlds will premiere Thursday, May 5, with new episodes streaming weekly. Set in the years Pike helmed the Enterprise, the series follows Pike (Anson Mount), Spock (Ethan Peck) and Number One (Rebecca Romijn) as they explore new worlds around the galaxy. Mount, Peck, and Romijn first appeared as the trio in Season 2 of Star Trek: Discovery.

Press PLAY above for a sneak peek at Strange New Worlds, and then beam down to the comments to give us your first impressions.