The fight for Charlotte’s love has officially begun on PBS’ Sanditon now that our favorite heroine has spent considerable time with both Alexander Colbourne and Colonel Francis Lennox.

Her connection seemed to be the strongest with Alexander because Charlotte helped him calm Hannibal, his horse, who got spooked upon hearing the Redcoats’ gunshots. An impressed Alexander watched in awe as Charlotte bravely approached the horse and explained she grew up caring for the animals. He returned the favor by helping the governess find Leo, who was mischievously hiding in a tree.

The next day, when Charlotte had a picnic with Augusta and Leo, Alexander joined them and gave her the cornflowers Leo had given him. Leo saw the sparks between them and smiled because her father actually seemed happy. Augusta was equally pleased because Charlotte had convinced Alexander to spend time with them, something he never does. And when Charlotte ran off to attend the town’s fair, all three of them were genuinely sad to see her go.

Charlotte also favored Alexander’s sprigs of cornflowers to the full bouquet Colonel Lennox sent her. For starters, Charlotte didn’t know this, but the colonel didn’t even pick them himself. He had Captain Declan Fraser do the honors. Captain William Carter also used Declan to impress Alison by borrowing a poem from Declan’s book. Ugh. Here’s hoping Alison ends up with Declan. 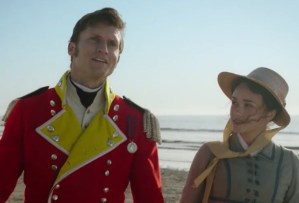 Anyway, back to Charlotte’s suitors. So, Alexander had the upper hand but the Colonel is not completely out of the running. When Charlotte volunteered to go up in the hot air balloon to make Tom Parker look good in front of the fine folks of Sanditon, Francis jumped into the balloon’s basket with her despite being afraid of heights.

He also breathlessly confessed to Charlotte that he’d never met a woman like her. That is until Charlotte mentioned she was beginning to like her employer, Alexander Colbourne, and suddenly Francis started throwing around gossip and envious feelings left and right. He said Alexander had stolen away the woman he loved, Leo’s mother Lucy, and she was bright and brave like Charlotte until Alexander “destroyed” her (whatever that means).

Now, Charlotte doesn’t know what to feel or whom to believe, but she certainly adores cornflowers. Given the choice, our money is on Alexander because the colonel, who keeps finding new ways to rip off Tom Parker and the town, is beginning to come across like a con man. The jury is still out on artist Charles Lockhart, too, because it’s unclear if he truly likes Georgiana or if he’s simply interested in her wealth — or both. Only time will tell.

What did you think of the latest installment of Sanditon and which man do you prefer for Charlotte? Drop your thoughts in the comments.