Warning: The following contains spoilers about the 100th episode of Young Sheldon. Do not proceed before watching.

For Young Sheldon‘s big brother Georgie, life will never be the same again.

The Big Bang Theory prequel’s 100th episode revealed that the 17-year-old high school dropout, who had been lying about his age, knocked up 30-year-old girlfriend Mandy (played by recurring guest star Emily Osment).

The milestone outing also featured the return of Sheldon’s fellow child prodigy Paige (again played by Mckenna Grace) — who, unlike Sheldon, was struggling to make friends or be taken seriously by the much older, male scientists that made up her university’s quantum gravity team.

Below, series co-creator Steve Molaro weighs in on the game-changing cliffhanger and the spinoff’s “natural evolution” from sitcom to dramedy.

TVLINE | One-hundredth episodes tend to go in one of two directions: Either it’s a reflection of how far a show has come since it started, or it’s a look toward the future — and perhaps the next 100 episodes. This episode, and what comes of Georgie’s storyline, falls into the latter camp. Can you talk to me a bit about the discussions you might have had with fellow co-creator Chuck Lorre about how best to mark the occasion?
We were a little hesitant to try and intentionally make a quote-unquote special episode. I don’t think viewers at home are terribly aware of the number. It’s just a number. Our main goal was to put out an episode that we thought was good and we were proud of, rather than force it, which is a thing that can happen sometimes and might have happened with Big Bang‘s hundredth.

Moving on, we’re in a really interesting position. We started off with Georgie, Missy and Sheldon ranging from eight to 14-years-old in real life [when we did the pilot]. Now we find ourselves able to tell more interesting, more mature stories with these actors and these characters. That’s a big part of what we’re excited about and how we landed on how the hundredth ends with Georgie. 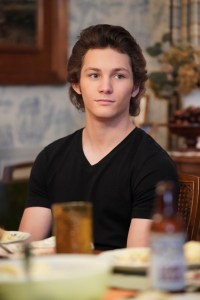 TVLINE | This season, in particular, it feels like you’re really embracing the idea of Young Sheldon as a dramedy. Did that play a hand in the decision to move forward with this pregnancy storyline?
Definitely — and we were aware of [the shift]. It wasn’t a black-and-white decision, like, “Hey, let’s start making this a dramedy.” There were always elements of it, and a while back we started telling a few of those [more dramatic] stories and it started to feel right. The kids were getting to an age where we could lean into it more, and tell stories that felt like they mattered to us. It has been a natural evolution, which is how we like things to grow when they can, and we’ve stayed more on that road. I think it’s working.

TVLINE | When you first cast Emily Osment as Mandy, did you know this is where things were headed?
No. Just like when we met Amy, just like when we met Bernadette, just as we were fortunate enough [on Young Sheldon] to get Craig T. Nelson and Wendie Malick [to play Dale and President Hagemeyer, respectively], we try it and we see if it feels like it’s working. If it is, we go, “Well, that was great! Let’s have more of that person and see where this could go.” So this was just another thing that evolved on its own.

TVLINE | In Big Bang‘s series finale, Sheldon acknowledges that Georgie has two ex-wives and a family of his own. Is this the start of that journey for his big bro?
It can be. We don’t have a precise roadmap in front of us — and to some extent, we don’t feel handcuffed to things that were said on Big Bang. I mean, there are some things that we will honor, but we also have to do what’s best for this series. If anybody points to something that doesn’t align perfectly with Big Bang, I’m happy to point out that on Cheers, Frasier was an only child, and it all worked out once Niles suddenly appeared. 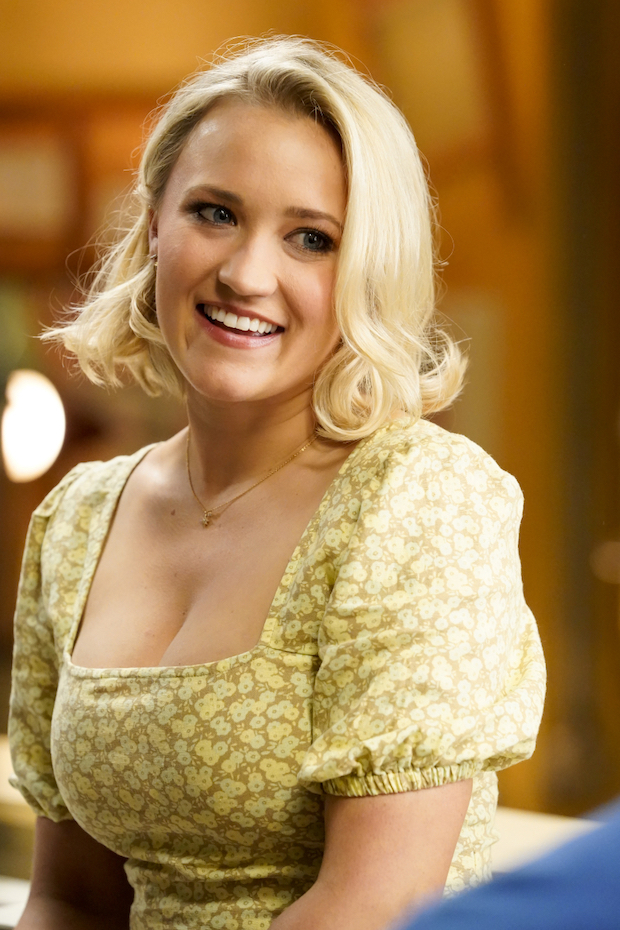 TVLINE | Certainly. But to Young Sheldon‘s credit, you’ve always found workarounds. You’re presenting stories from a perspective that Sheldon wouldn’t have understood, or wouldn’t have been privy to, when he was just a boy.
Right, and I appreciate you noticing that. That has become, to me, a big part of what this series is about, and I would not claim we knew that going into it. It presented itself to us. You have Sheldon, who is the narrator some years in the future and finds himself at an age beyond his own father, [a man] he didn’t understand when he was a kid. It’s a bit of a revelation. Maybe the things he thought about his parents, in particular his dad, were not quite accurate and he needs to rethink them, and that is one of the things holding this whole series up.

TVLINE | It feels like that perspective you now have, of what the series could be and what it has become, became fully formed midway through Season 3, when Sheldon and George Sr. visited CalTech. Would you say that’s accurate?
That was certainly a fork in the road for us, for sure. I’m very fond of that episode, and I think it’s interesting when we’re able to, hopefully, be successful in taking a thing you thought you knew about these characters and present it in a different light.

TVLINE | Young Sheldon has never shied away from Big Bang Easter eggs, but this episode doesn’t contain one. There’s a future reveal about Sheldon taking his son Leonard to the skate park, but that’s more of an aside. Was it important that the 100th be indicative of the wholly separate identity the prequel has carved out for itself?
I think that’s fair to say. We typically work in Easter eggs as they come up organically. It’s not often that we’ll build an entire episode around them — though there are one or two, obviously, like when Sheldon wanted to see Stephen Hawking speak and his father took him to Pasadena [in the aforementioned CalTech episode]. I don’t even think we thought about [whether] there was a Big Bang Easter egg we could squeak in. That really wasn’t on our minds as we were figuring this one out. 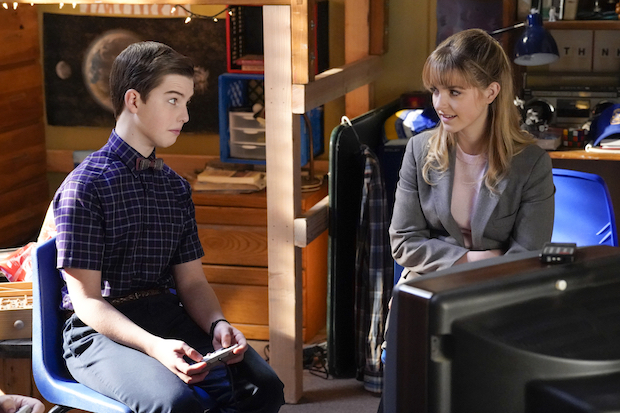 TVLINE | What was the idea behind focusing so much of this 100th episode on Sheldon’s friendship with Paige?
We were lucky to find a day or two where we were able to get Mckenna Grace, another good actor we’ve had the good fortune of watching grow up on our stage and have been able to tell more interesting stories [with as she has gotten older]. We were just trying to find an episode that we were excited to write, more so than doing anything special because it was number 100. This story of Paige came up, and we thought it was interesting that it involves two child prodigies who are in college at age 12. But it’s also deeply rooted in the emotional growth of those characters and the show itself.

TVLINE | It’s no question that Paige is an essential part of Sheldon’s coming-of-age story, but she is not seen or mentioned on Big Bang. Here she runs away, but eventually is reunited with her mom, which could be perceived as something of a conclusion for this character’s arc and her part in Sheldon’s life. Is this the last we’ll see of her, or is the door still open for her to return?
The door is absolutely open. We love working with Mckenna, she’s an incredible actor, and we really love the growth of the relationship between Sheldon and Paige. So the door is absolutely open in the future.

Once you’ve picked your jaws off up the floor, grade Young Sheldon‘s 100th episode via the following poll, then drop a comment with your reactions to the Georgie/Mandy cliffhanger.