With Will asking so many questions about his father Lou, it was inevitable that he would show up in Bel-Air’s Season 1 finale to clear the air.

Lou (played by Marlon Wayans) caught wind of Will’s inquiries and met with his son for the first time in a decade. It turns out that Phil and Vivian lied about Lou abandoning him, that Lou had actually been incarcerated. However, their conversation grew tense when Lou insulted Will’s mother Vy and gave the excuse that he was trying to get back on his feet when asked why he never saw his son despite being out of prison for several years.

Will, feeling betrayed by both the Bankses and his father, stormed out of the house and declared that he was done with Bel-Air. And while Jazz urged Will to decide his future for himself, the episode ended with things up in the air.

In the wake of that cliffhanger, TVLine spoke to showrunners T.J. Brady and Rasheed Newson about Will’s dilemma, why Marlon Wayans was the right man to play Lou, and what’s ahead for Season 2.

TVLINE | Did you always know that Marlon Wayans would play Will’s father Lou on the show? How did this come about?
RASHEED NEWSON | The thing was trying to find somebody who would be both notable and a surprise to the audience. That was the tough thread. Marlon is known mostly for his comedic work. He’s great with the drama but is not necessarily who the audience expects to come to the door, so that gave it added power.

TVLINE | What were the other names floated around during that conversation?
NEWSON | There are the usual suspects. You go, ‘Well, should we get Terrance Howard? Should we get Omari Hardwick?’ But the question becomes would they be carrying the other characters they’ve played so successfully into our show? That’s what genuinely makes it tough. Would the audience just think, ‘Oh, somebody from Empire has stepped into Bel-Air?’
T.J. BRADY | To be clear, none of them were approached. 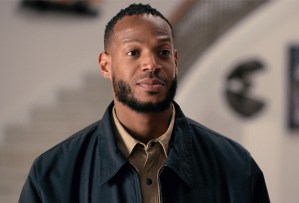 TVLINE |Will’s confrontation with Lou is reminiscent of the one in Fresh Prince of Bel-Air. However, you gave Lou a more nuanced reason for not being in Will’s life. Can you talk about making that relationship more complex, and what you wanted to say with that scene?
BRADY | Just like we’re reimagining the show on a large scale, we wanted to look at that meeting of Will and his father and reimagine that and not try to redo it. We wanted whatever we did to involve more members of the family. They were complicit in telling a four-year-old a story that wasn’t necessarily true and couldn’t decide when would be the right time to come clean. They missed the opportunity, and it blew up in their face.
NEWSON | If he was just a deadbeat, Will probably would not want to bother with him. There’s nothing to explore there. Louis is still a deeply flawed person and a failed father, but he is making choices that he believes are in the best interest of his son. You can disagree with the choice, but the motive is still good and that gives him a redeeming quality that makes him more interesting as a character.
BRADY | It’s even more nuanced because he’s been out of prison for some time and never reached out. What started out as a thing you can understand, it dawns on Will, “Where have you been these past couple of years?’

TVLINE | We end with Will sitting with all of this information — Vivian and Phil’s betrayal, Lou’s abandonment not being a black-and-white thing, and Jazz’s sage advice — so where does that lead him in Season 2?
BRADY | He’s going to try and define himself in Los Angeles outside of Bel-Air. We can look forward to him seeing what else that city has to offer in terms of making him feel like he belongs, places and people where he can thrive, and just figuring out a future for himself. The incident with Lou coupled with Jazz’s words and Will’s journey are going to take him on that coming-of-age self discovery that everyone can relate to.
NEWSON | I just want to point out that this finale owes much of its power to the fact that we know we’ve got a second season. T.J. and I have been on a lot of shows, and when you’re ending and you haven’t gotten the pickup for next season, the mandate usually is, “Can you end this season as if it is both a season ender and a series finale?” Which means you don’t typically get to do a big cliffhanger or you don’t get to blow things up the way we’re blowing things up. If we didn’t know we had that pickup, there’d have to be hugs and tears in the foyer with everybody reconciled because they’ll go, ‘Well, we can’t potentially end the show on such a discorded note.’
BRADY | [Knowing we had another season] allowed us to be freer to tell a better story — one that is ongoing and not resolved so easily.

TVLINE | Vivian has this amazing opportunity with the fellowship. With Phil dropping out of the race and focusing more on his family, where does that leave them both? And do you think Phil is ready to step back and let Vivian take the wheel career-wise?
NEWSON | There are two great points of drama: When you can’t get what you want, and when you get everything you want, and that’s where we go with Vivian in Season 2. She asked for this and pursued it, and of course it’s going to be difficult and overwhelming. She’s going to feel a little caught because you can’t complain about something you prayed for. It puts you in a really tough spot.
BRADY | We’re very familiar with that phenomenon since taking over the show. You pray to be a showrunner. You pray to get the support that we got for this show. You pray to launch on Super Bowl Sunday. You pray that people will tune in once you get all those things. Doesn’t mean it was easy.
NEWSON | I wanted to be a showrunner’ I didn’t say I wanted to do it in the heat of a pandemic. Every day started with us in our office getting a call of who tested positive at the gate and trying to figure out how we are going to shoot.

TVLINE | So, there were different hurdles compared to running a show before the pandemic.
NEWSON | We once had an actor test positive the morning we’re shooting and setting the lights up. We had another actor who was clear but in ADR [re-recording dialogue] and we pulled that actor from ADR and said, “Guess what? You’re in today’s scene. We’re writing this character out and we’re putting you in.” Thank God it’s a family show, so it’s a little easier to just have anybody walk into the kitchen.
BRADY | I’m so thankful for everyone’s willingness to just step up whenever we needed them to, and they always delivered beyond our wildest hopes.

TVLINE | Michael Ealy is known for playing characters who disrupt people’s lives. Knowing that, what were your intentions behind Reed’s relationship with Vivian? And while they’re keeping things professional, do you think that will continue to be the case?
NEWSON | That tension is unavoidable. That was the beauty of casting Michael Ealy; we knew everybody would go, “Aww no!” as soon as he walked around the corner with two glasses of wine in his hand. You don’t even need dialogue. Everybody knows…. There’s physical infidelity, but there’s also emotional cheating. What he’s able to do is talk to Viv in a language and in a way about her work that Phil doesn’t, and it just feeds a side of her that’s very important to her that she’s not getting that at home. That opens the door to tension and we’re going to play it as long as we can play it. 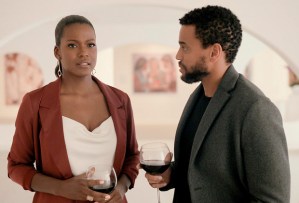 The beef between Carlton and Will over Lisa has been resolved, but has their conflict really been squashed? How would you describe their relationship?
BRADY | You will see conflict and drama evolve from what it was. They might get into conflict even being on the same side of an issue. We don’t want it to be the same old thing that started off in the first few episodes of the season. They are much closer now. Their relationship is different and has evolved. But we can still expect to see them disagree on things here and there.
NEWSON | And those disagreements don’t all have to be as heated or heavy as white kids singing along to rap songs with the N-word in it. But Carlton is going to still be Carlton, and Carlton’s view of the culture and tradition, particularly African American tradition, is always going to be different than Will’s.

TVLINE | Geoffrey had always been a bit of a mystery, but we did get to learn a bit more about him in this show. Do you think you’ll explore more of his backstory, or will you maintain the mystique?
NEWSON | Our first job in Season 2 is how to get Geoffrey [back into the Banks household]. You could almost discover anything with him, like he speaks five languages and he ran a hotel in Marrakesh. We’ll just keep learning more and more about him as we go.

TVLINE | What do you hope to explore in Season 2?
BRADY | [Regarding] identity, how much of your past and where you grew up makes you who you are now? How much of it should affect who you are now? [We will continue] to attack that issue and peel it back and discover and debate it.
NEWSON | On the surface, it’s Will’s coming-of-age story, but the story is also the evolution of a Black family. They have an idea of who they should be and who the world wants them to be. That’s where the drama is going to come from, when you deviate from what’s expected of you because of the station you were born in. It can be something as simple as Hillary deciding not to go to college or something as major as Ashley exploring her sexual identity. We want to continue those stories. Something we did learn in Season 1 is that when you have this many characters and you want to tell stories that are as layered as the ones we want to tell, you don’t get as far with each of them as you might have thought. It feels great to have two seasons because I didn’t worry. I would have loved more Ashley; I would love more Ashley and Will. We’re going to build that into Season 2.

What did you think of Bel-Air‘s Season 1 finale? Grade the episode below and let us know your thoughts in the comments.