Forget Joey Amazing, Johnny Amazing is here and he’s already cemented his rightful spot in the Survivor Hall of Fame.

Taku’s Jonathan Young might just be the biggest, most capable challenge beast the show has ever seen. He swims like a fish, he’s strong like a bull… he has every animal’s absolute best qualities! He’s superhuman. An absolute specimen. Maybe he should even consider a life of fighting crime. He is that good.

But he’s not going to win this game.

Look, Jonathan may be the product of five Ozzy Lusths, three Joe Anglims and two Malcolm Freburgs all rolled into one, but none of those guys ever won Survivor and this one won’t either. We’ve seen it time and time again, but the first merge challenge he loses, this dude’s outta there. And if I’m totally off-base here, I’ll eat my hat. (It’s orange and has the Survivor logo on it and is from the CBS store. It’s a nice cap, if I do say so myself, and I would very much like to not consume it.)

In Wednesday’s episode, Taku, of course, continued its winning streak, while one of the other tribes was a bit preoccupied with its own self-implosion. Who’s trustworthy, who’s not and who went home? Let’s get to the recap!

Vati returns from Tribal Council and to say they have a lot to unpack is beyond an understatement. Daniel says he wasn’t feeling Chanelle’s loyalty, but admits to “totally screwing everything up.” Everyone is feeling blindsided. Chanelle’s confused as to why Daniel threw her under the bus, while Mike and Hai seem fine to let the two duke it out. Daniel admits he was caught playing both sides, but he’s astounded that Chanelle isn’t suffering similar blowback.

REWARD | For the night’s first challenge, three members from each tribe are attached to a tangled rope. After untangling themselves, they must use lassos to pull a sled filled with balls toward them. Then, each player must sink a ball in a basket. The reward? Ten freshly caught fish delivered straight to their camp.

Taku easily figures out the ropes situation, and is the first to get their sled and balls. But before the other tribes can even take a single shot, Taku’s done and already grilling their grub (or so it seems). Are they simply undefeatable at this point?

And yes, much of that credit goes to their “Goliath” (as Tori calls him) Jonathan, who winds up regretting telling Jeff (plus Ika and Vati) that his tribe is a “strong four.” While Jonathan may be an asset to Taku now, he’s no dummy. He knows he’s going to be a shield for the rest of ’em going forward. We’ll have to wait and see whether he’s able to navigate the next stages of the game.

IKA | Swati feels like she’s not in a power position and wants to change that. She talks to Tori about possibly voting out Drea (since they know about her extra vote), but Tori cringes at the thought of working with Rocksroy. She thinks he’s a narcissist, but to get him on her side, she tells him about Drea’s not-so-secret advantage. He doesn’t trust her at all, though, so he drags her name to Drea, which “changed everything.” Drea then reports it all back to Swati, who tells us that as much as she wants to work with Tori, she’s not about to go down with her. Can’t help but think Ika’s about to lose immunity since the edit here is so heavy.

IMMUNITY IS BACK UP FOR GRABS | Maryanne repeats her bunny nonsense, but gets crickets in return. (Shouldn’t Mike be forced to utter his phrase, hence the whole, “You gotta do what the Beware advantage tells you to” business? I wonder why producers didn’t enforce that.)

For the challenge, two tribe members are tethered to a boat. They must dive in and pull their other tribe members to a tower. Those players must jump off the tower and grab a key midair, then unlock their puzzle pieces, yada, yada, yada. 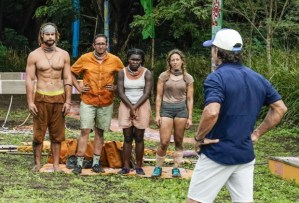 Seconds in, Probst can’t help but gush over Jonathan’s Aquaman skills once again. (Is it fair to Jonathan’s game to keep calling it out, though?)

As players jump off their towers, I can’t help but think of how much higher the perches were on Season 4 of Australian Survivor. These leaps look like a cake walk by comparison. Lydia is the only person to jump and miss (twice), which gives Taku a commanding lead, and jump-start on the puzzle.

Omar and Maryanne secure the win for Taku, while Vati, who was in dead last this whole challenge, finishes second, barely escaping Tribal. As predicted, Ika’s got a date with Jeff.

(Sidebar: As the winning tribes began to swim out, did you see/hear/feel Omar’s massive belly flop? Because I sure did… and then I proceeded to rewind and rewatch it no less than nine times.)

STRATEGY | Rocksroy says they need to eliminate the biggest threat, which is Tori. She can’t keep a secret and can’t be trusted. Easy enough? But Romeo’s confused as to why Swati told Tori about the alliance between Swati, Rocks, Drea and Romeo, which gets him thinking that Swati is playing way too hard. Romeo and Drea compare notes, and it’s clear Swati is playing everyone against each other, and it rubs them the wrong way.

TRIBAL COUNCIL | Jeff starts by asking Drea what the vibe of the tribe is. After a long pause, she says she doesn’t know how to explain it. They haven’t been able to pull together as one yet. Tori adds that the vibe is “off.” Swati says she thought the headline was someone (Tori) trying to make a big move, getting caught and subsequently getting voted out. But she feels the focus has shifted toward her, so she pulls out all the stops, outing Tori to everyone and revealing that Tori wanted to blindside Drea. Tori says Swati’s just using her as the scapegoat because Swati feels vulnerable herself. Very true, but it’s great to see Swati stick up for herself and go down swinging.

And that’s exactly where she goes: Down and out. After using her Shot in the Dark (NOT SAFE), Swati is voted out of the game.

Did the right person go home? And will the other tribes ever be able to take down Taku? Hit the Comments with your thoughts!