Skully’s survival skills on FX’s Snowfall are unmatched. There have been a number of attempts on his life, and he tragically lost his daughter and her mother to senseless, drug-related violence.

After cutting a deal with Louie and Jerome at the start of Season 5, Skully is still in business and continues to run his Inglewood-based cocaine empire with brute force and bizarre superstitions. It’s a method that cost him his latest lieutenant, Mello (played by Simeon Othello Daise), whom he had to kill for trying to usurp him.

According to De’Aundre Bonds, the actor who brings Skully to life, this is not the last we will see of his character this season when Snowfall airs Wednesdays at 10/9c. It’s going to be especially intriguing to learn which camp Skully sides with — Franklin and his family, or that of their latest rival, Kane.

“Skully is a real person [the late] John Singleton knew growing up in the ‘hood from Inglewood,” Bonds reveals to TVLine. “He was a hothead, and he was crazy, but he was also compassionate, had a sense of understanding and looked out for his family and his community — even when he was whacked out.”

Bonds adds that the most important part of playing Skully is making sure he stays grounded and never devolves into a caricature.

“Skully is not a hard character for me to play because I played Stacey in Dope and The Wood,” the Los Angeles native explains. “Stacey was a reputable Blood, so I just feed off that. I’ve never met a Skully in real life, and there are some crazy people out here, but I never bump heads with them. That’s the spin I take on Skully. You can’t put him in a box, but he also doesn’t bother those who don’t bother him. Every time I play him, I just try to set the performance on fire with his words and his actions. This is a guy who is suffering inside and will hang another motherf–ker from his balls just to let everyone know not to cross him.” 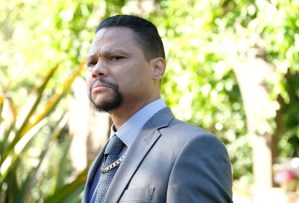 The crime boss also doesn’t have any friends or relatives, but that’s what fuels him, Bonds shares.

“Playing Skully allows me to be a complete deviant,” Bonds adds with a chuckle. “I channel a lot of rage and loneliness into him. He has a whole army outside his door, but he can’t trust them because the threat of mutiny is always there. Look at what happened with Mello. Skully did a lot for him, but he loathed Skully in his heart, which is too bad, because I really liked the cat who played Mello. I wish he could’ve stuck around.”

Bonds is also hoping that the range he shows in his turn as Skully will eventually lead to him tackling roles that don’t involve gangs, guns or drugs.

“What I loved about Season 4 is that I was able to show Skully cry and mourn and suffer,” Bonds recalls. “Right now, I just want to work, but these characters don’t align with my beliefs or who I really am. It’s work. I am looking for more dramatic roles that showcase my abilities. I would love to play a steelworker who is a husband and a father. That’s what I want to do next. We saw a little of that in Skully when his family got killed, and I want to keep showing that side of me.”

Are you excited about Skully’s Season 5 evolution on Snowfall? And whose side do you think he will take? Drop your thoughts in the comments.