This week’s Snowfall created a fascinating gender study where almost all of the male characters blindly trusted and the women were instinctively mistrustful.

The most glaring example on Wednesday’s episode was when Leon decided he could reason with Kane — who had just tried to kill them all — by brokering a business deal with him. Franklin agreed with Leon, but Leon also said if Kane didn’t get with the program, he would personally kill him himself. Louie didn’t believe in the plan and instead secretly met with Buckley to arrange a hit on Kane’s life, even after he agreed to Leon’s offer.

Buckley warned Louie if she rang the murder-for-hire bell, it couldn’t be unrung, and Louie accepted the consequences. We just hope Jerome isn’t a casualty now that he’s slowly backing out of the drug game. After discovering that he didn’t know Peaches very well — a heroin addiction? What?! — and sitting in on a veterans’ PTSD support group, Jerome realized he’s suffering some trauma of his own.

Jerome never set out to be a gangster or a murderer. He just wanted to sell a little weed and make phat sound systems for cars. Franklin, Louie and Cissy pulled him into the crack cocaine game, but given everything that’s happened, no one can blame him for searching for the nearest exit. Before bailing, Jerome also asked Louie to marry him, which was crazy because everyone, including Buckley, thought they were already husband and wife. 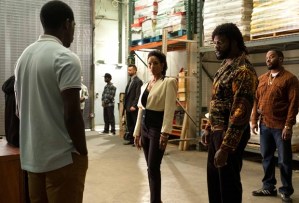 Meanwhile in Franklin’s world, Veronique asked the aspiring real estate mogul why he thought Kane would settle for a piece of their money pie. Franklin argued that Kane wants to take care of his family, and Veronique accepted his answer and added that if Kane were lying, any deceptiveness would reveal itself — and Franklin knew she was right. Kane can’t be trusted. They just don’t know what he’s going to do next.

Teddy is just as shady. He yelled at Franklin for hiring a turncoat like Peaches and tried to interrogate Franklin’s new muscle. He also told Franklin that he would be picking the drop spots from now on. Later, Gustavo caught Teddy examining his wiretap equipment in order to spy on Franklin, who he claimed was “getting lazy.” This was when Gustavo, aka Oso, realized Franklin was right about Teddy’s newfound paranoia. The question is: Will Oso help Teddy, and if he does, will he also tell Franklin what Teddy is planning to do?

Speaking of listening devices, Cissy is still walking around with that pen Reuben gave her. However, it is unclear what she intends to do with it. Will she use it to spy on Veronique or Franklin or both, and what does she expect to accomplish? No matter what, now that Teddy knows she’s not in Cuba anymore, he’s put a target on Cissy’s back as well.

What did you think of this week’s Snowfall, and do you miss that tiger? Drop your thoughts in the comments.