Although Bridgerton star Charithra Chandran plays Edwina on Netflix’s wildly popular Regency-era drama, she doesn’t think she could be as kind as her character when it comes to matters of love.

“Even the crew said Edwina was a babe,” Chandran tells TVLine with a laugh, regarding the Anthony/Kate/Edwina love debacle. “Because if they were in her situation, they said they would be throwing hands. Thank God it was Edwina and not Charithra, let me tell you that.”

All jokes aside, both Chandran and Kate’s portrayer, Simone Ashley, say the real love story is between the Sharma sisters (aka Didi and Bon) and their road back to forgiveness and love. And they hope audiences realize that, too.

“What’s amazing about the show is everyone will be able to relate to different characters,” Chandran observes. “The best art enables us to have discourse about it. Some people will agree with Kate and Anthony’s decision, even if they were messy, while others will see things through Edwina’s eyes. I read the script and thought Edwina was too generous. But nothing brings a family together like a near-death experience. Enough Bollywood movies confirm that.” 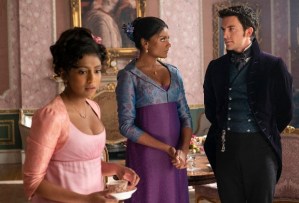 “It’s easy to think of it as a love triangle with two sisters vying for the same man,” Chandran says. “It’s more complicated than that. It hurts Edwina more that Kate lied to her. She loves Kate more. By the end of Episode 6 she’s like, ‘Anthony, you’re trash, man.’ But Kate is her soulmate.”

Ashley agrees, noting that’s why Kate insisted on making things right with Edwina first and foremost. Queen Charlotte also had Edwina’s back and will hook her up with her nephew, the Prince of Prussia.

“As an audience, you get to see Kate’s intentions to always protect Edwina’s best interests, so she can be happy,” Ashley explains. “Kate also had her own wants and desires and she got distracted and stopped communicating honestly with her family and herself and she messed things up. I think it took something like that to make her stronger. She almost died, too.”

Do you think Edwina was too understanding or did she handle things the best way she could? How do you feel about Kate? Drop your thoughts in the comments.