The OG Aunt Viv is coming to Will Smith‘s defense.

Janet Hubert, who originated the role of Vivian Banks on The Fresh Prince of Bel-Air, took to Instagram late Sunday to celebrate Smith’s Oscar win for Best Actor and to speak in support of her former costar after he took a swing at presenter Chris Rock.

“So PROUD OF YOU!” she wrote in response to Smith’s acceptance speech, before pivoting to the slap. “There is only so much one can take… sometimes you have to slap back,” she argued. “Celebrate the win… nothing else matters. Both actions were incorrect but Chris didn’t need to go there. Met him once… it was enough for me… very mean spirited.”

The heated moment between Rock and Smith occurred about two-and-a-half hours into ABC’s broadcast. While presenting Best Documentary Feature, Rock quipped, “Jada, I love ya. GI Jane 2 — can’t wait to see it,” directing his comments at Jada Pinkett Smith, who is bald and who has previously spoken publicly about her hair loss condition, alopecia.

Though Smith appeared to laugh at the joke at first, Pinkett Smith rolled her eyes and appeared displeased. Soon after, Smith walked up to the stage and slapped Rock. “Wow, Will Smith just smacked the s–t out of me,” Rock said. Then Smith, who had returned to his seat, yelled from the audience, “Keep my wife’s name out your f–king mouth,” and repeated it after Rock protested that the dig had just been a joke.

Hubert, whose behind-the-scenes issues with Smith famously led to her early departure as Aunt Viv, hadn’t spoken to Smith in 27 years before they sat down to bury the hatchet in September 2020 as part of HBO Max’s Fresh Prince reunion special. Ultimately replaced by Daphne Maxwell Reid for the show’s final three seasons, Hubert had chronicled her difficult departure — much of which she blamed on Smith, who was a producer at the time — in her 2009 memoir Perfection Is Not a Sitcom Mom. 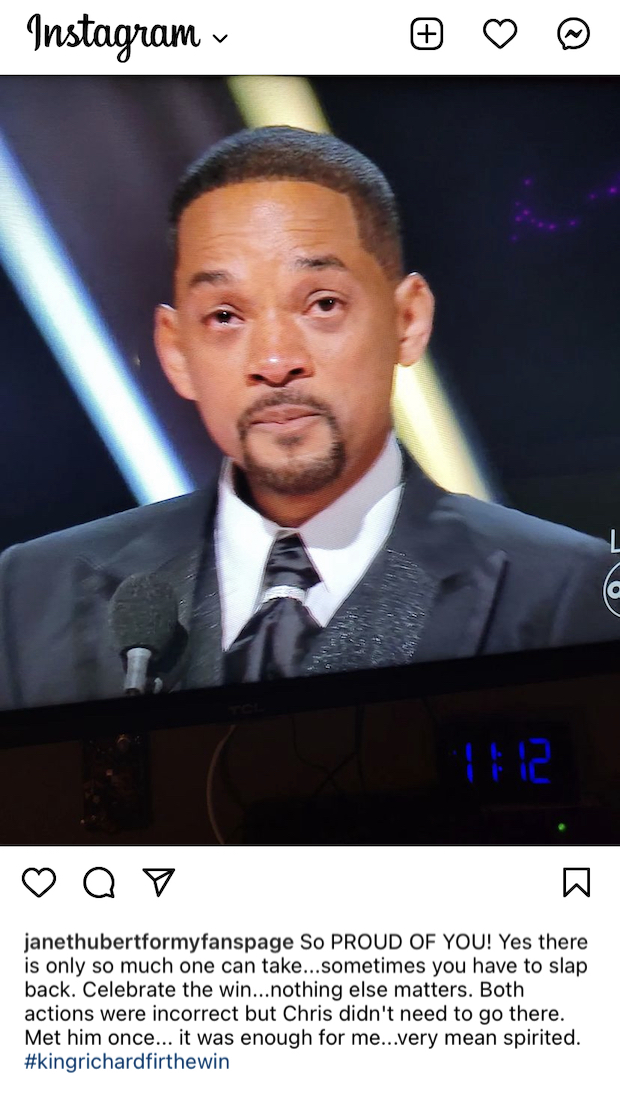