Following a pretty steady slide that over the past 10 years alone saw the audience plummet by 74 percent, viewership for the Oscars surged this year, with a telecast that brought back the concept of a host(s) and (ICYMI!) featured a 10 pm physical fracas between Will Smith and Chris Rock.

In a recent TVLine reader poll about this year’s Oscars viewership (full results below), 67% predicted that the telecast would dip to a new all-time low, while 33% suspected the audience would grow, to varying degrees.

Update: In the Nielsen finals issued by ABC, Sunday night’s telecast drew 16.6 million total viewers, up 60 percent from last year’s final count; in the demo, the show was up 73 percent, with a 3.8 rating.

The 2021 Oscars went on to report a final audience of 10.4 million along with a 2.2 demo rating, which both marked record lows.

TVLine readers gave Sunday night’s ceremony an average grade of “D,” which is itself an improvement over last year’s rare “F” average. 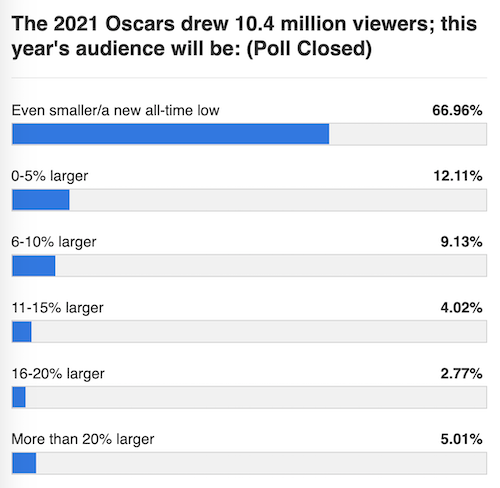 Last year, ABC’s mid-pandemic presentation of the Oscars averaged 10.4 million total viewers, down 56 percent from its 2020 audience to mark an all-time low. Prior to 2020’s first host-less Oscars, which were held a month prior to what would be the onset of the COVID pandemic, the “record holder” for smallest audience was the 2018 telecast hosted by Jimmy Kimmel, which drew 26.5 million viewers.

Among those airing fresh fare against the Oscars:

CBS | As broken down by the network (and pending adjustment due to March Madness-delayed starts), 60 Minutes is currently reporting 6.6 million viewers, a special airing of NCIS: LA did 5 mil followed by a regular airing’s 4.5 mil, and S.W.A.T. copped 3.4 mil.