Well, that didn’t take long. Just one week after Owen found a bloody pig corpse in his bed (gross, by the way!) on 9-1-1: Lone Star, we already know who put it there — and it’s not who we expected.

Owen reasonably assumed that Sheriff’s Deputy Roy Griffin, the dirty cop who nearly killed him during the ice storm earlier this season, was to blame. After all, he’d been released without so much as a trial.

And for a while, we agreed with him. Come on, the guy showed up at Sadie’s art gallery and told Marjan that his only regret was not killing her and throwing her corpse into a ditch. And then the whole place suddenly goes up in flames? Suspicious!

Fortunately, the 126 showed up in time to save Sadie, who was allegedly painting with headphones on when the smoke caused her to collapse. I say “allegedly” because this was the part of the episode where I started to get capital-S suspicious of Julie Benz’s character. 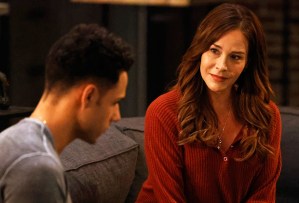 That suspicion only grew after seeing her response to meeting Owen’s girlfriend Catherine. (If looks could kill!) It got a whole lot stronger when Griffin’s own car went up in flames, and it was fully confirmed when Carlos and T.K. passed out after eating Sadie’s cooking. To paraphrase the “Cell Block Tango,” some guys just can’t hold their oxy. (On a serious note, it did break my heart when T.K. acknowledged that he technically has to restart his sobriety at Day 1.)

Marjan, who’s making a habit of arriving at her coworkers’ apartments at just the right moment, came to check on Carlos and T.K., triggering a brief-but-satisfying face-off, ended with Marjan stabbed and Sadie unconscious.

Technically, Marjan got off lucky. Well, luckier than Sadie’s ex-husband, whose severed head was apparently found in her freezer. And speaking of exes, what’s this about Owen’s other ex-wife from New York? Lorraine, is it? And what’s her “thing with knives” to which T.K. alluded?

Maybe that’s a question for another day. For now, drop a comment with your thoughts on this week’s episode below. Did you suspect Sadie before she was exposed?