Sunday’s episode of The Walking Dead wasn’t just dedicated to ensuring that we all realized how badly we’d underestimated how much it was possible to despise Sebastian — although there was a good bit of that, too. It also teed up one reveal after another and told a most deserving character in no uncertain terms to rest in pieces. Who turned out to be both married and expecting, and who wound up giving walkers indigestion? Read on…

‘LET’S PUT OUR S—T BACK IN OUR PANTS AND ZIP UP, SHALL WE?’ | Picking up where “Warlords” left off, “The Rotten Core” wasted little time making an unlikely team of Maggie, Gabriel, Aaron, Elijah and Lydia, and Negan and Annie, who turned out to be the reformed villain’s wife (and one far happier about it than, say, Sherry was). In the secret room of an apartment (accessible only through a closet door), they decided to split up and sweep the building to round up anyone left that Carlson and the troopers hadn’t yet slaughtered. But they’d scarcely gotten started when Negan spotted through a window a trooper with a stowaway from Maggie’s truck: Hershel! In no time, the Saviors’ former leader had brutally dispatched the trooper before the moppet’s eyes. At the same time, Annie was revealing to Maggie that she was 12 weeks pregnant — and yes, she knew about her husband’s past. She had one herself. “All I can do now,” said Annie, “is try to be better, just like him.” Which wasn’t much comfort to Maggie when she learned that he had her son. “If anything happens to him… ” she warned. “It’ll have to happen to me first,” Negan promised. 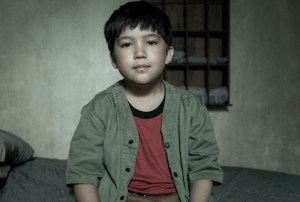 Back in the hiding place, Hershel deduced that Negan was his father’s killer and trained a gun on him. Negan admitted that he had indeed murdered Glenn and maybe deserved to die himself. But all the other people hiding out, they didn’t. And if Hershel pulled the trigger, Carlson & Co. would know where they were. So the kid turned over the weapon to Lydia, at which point Negan actually appeared to shed a tear. Later, Carlson took a break from eyeballing a bottle of whiskey like he was Sue Ellen Ewing long enough to come thisclose to finding the secret room. But in the nick of time, he was distracted by sounds from up on the roof: Gabriel and Aaron. As Carlson speechified at them rather than simply blow them away, Elijah snuck up behind his guards, and presto change-o, suddenly, Carlson was begging for his life. His pleas fell on deaf ears, however: Aaron shot him off the roof and let his reanimated victims down below chow down. 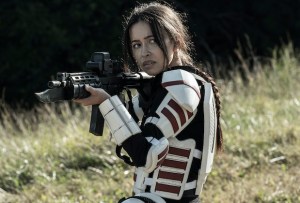 ’I AM SO GLAD THAT WE ARE FRIENDS AGAIN’ | Back in the Commonwealth, Sebastian — already a lock for Most Heinous Character of the Year, right? — threatened Daryl and Rosita into breaking into a rich old buddy’s daddy’s panic room to clean out the vault (since Mommy had cut off the brat’s allowance). Why didn’t his guards just do it? They couldn’t shoot — it would attract attention. But Sebastian knew that Daryl and Rosita could get the job done without gunfire. However reluctantly, the duo accepted the challenge, only to discover that they weren’t the first people to whom Sebastian had assigned the task. He’d previously offered the poor a cut of the money if they did it, and one unfortunate soul, April, had been trapped in the panic room for ages! As you’d expect of Daryl and Rosita, they made short work of the job. Yeah, there were some glitches — like a noisy alarm that had drawn a bunch of walkers. But they were just going to smear themselves with guts and walk out as casually as a shoplifter might from the corner store.

Before they could, however, shots rang out. WTF? It was Mercer and Carol. She had recruited him to help when Daryl had missed their lunch date. Finally, they all tried to stroll out covered in gore. But April, whose only luck appeared to be bad, got part of the uniform Rosita’d given her snagged on a walker and wound up getting eaten. Once Daryl, Rosita and Carol had met up with Sebastian’s guards and they’d glibly revealed how many people had been sent in to try to to retrieve the loot, Mercer shot them both in the head. He had no tolerance for that kind of BS. Nevertheless, he said that Daryl and Rosita would still have to pay Sebastian; fighting him was a losing battle. Then, as the hour drew to a close, Carol paid a visit to Lance, who didn’t hide the fact that he’d long known what Sebastian was up to. His victims “put themselves in bad situations,” argued the politician, “either through stupid choices or an unwillingness to play by the rules.” Carol, ever the consummate actress, seemed to make him believe that in her, he’d found a kindred spirit, someone who understood. 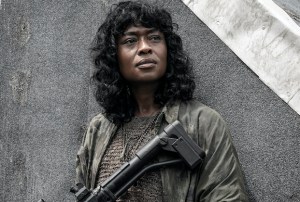 Finally, before everyone departed the apartment complex, Negan acknowledged that he and Hershel had unfinished business. Find him when he was grown, Negan told the boy. They’d finish it. For their part, Aaron and Gabriel had to return to the Commonwealth; Lance would want to know what happened (or some version of it, anyway). But if Ian’s people hadn’t hijacked the convoy and stolen the guns, they all wondered, who had? Cut to: two weeks earlier and a quick scene that revealed that the culprit was none other than Leah. We all knew we’d be seeing her again, right? Was anyone else surprised to realize that three months had passed since Negan took off? And can we all agree that Sebastian needs to die an even more horrific death than Carlson?