Halo this Thursday leaped from your TV screen to… well, that same TV screen, as Paramount+ premiered a series inspired by the globally popular video game franchise. At first blush, does this live-action Master Chief hit the target? 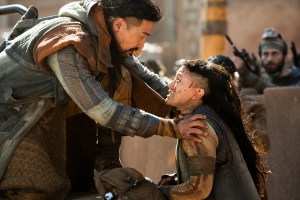 Halo‘s series premiere kicks off on Madrigal, an outer colony planet doubling as a rebel outpost. The episode opens with some important table-setting: a group of dirty, tired-looking warriors gathers around a table, playing cards and fueling the legends of fighters known as Spartans. The focus then shifts to General Jin Ha (played by Rookie Historian‘s Jeong-hwan Kong), who is looking for his errant daughter Kwan (Reef Break‘s Yerin Ha).

Kwan and her friends have gone foraging for hallucinogenic plants, which apparently thrive in Madrigal’s hydrogen-rich climate. But before they can partake, blasts rip through the quiet woodland, killing everyone but Kwan. She quickly retreats back to the outpost, bringing a rush of alien soldiers — and a string of Halo buzzwords — with her.

Alien soldiers called Elites pursue Kwan back to the outpost and make short work of its defenders. Fortunately for Kwan, the attack eventually draws the attention of the Spartans. Led by Master Chief (Orange Is the New Black‘s Pablo Schreiber), the armed-n-armored newcomers dispatch the alien troops with terrifying efficiency but are unable to save the rebels. Kwan is the sole survivor. It’s here that we’re formally introduced to the show’s overarching threat, the multi-species alien hegemony known as the Covenant.

Following the brutal attack, the Spartans discover a Covenant Phantom spacecraft on a nearby ridge. Cut into the cliff face directly beneath the Phantom is a deep cave network. Exploring the caves, Master Chief discovers and unknowingly activates an artifact that triggers memories he can’t place, and shows him people he doesn’t recognize. 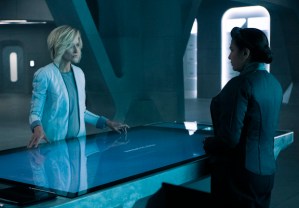 Meanwhile, at the United Nations Space Command (UNSC) HQ on the planet Reach, tensions are high. Dr. Catherine Halsey (Californication‘s Natascha McElhone) studies the video relay from the cave expedition, an enigmatic smile tugging at the corners of her lips. Her superior, Admiral Parangosky (24: India‘s Shabana Azmi), reprimands her for the Madrigal massacre. As creator of the Spartan program, Halsey bears ultimate responsibility for every miscalculation. Despite their best efforts, the Spartans remain in the dark about the Covenant’s true goal.

At Covenant High Command, the stubbly Prophet of Mercy convenes with Makee (Peaky Blinders‘ Charlie Murphy) about the botched excavation on Madrigal. Makee proclaims that she must meet with Master Chief about his connection to the artifact.

Cut back to Master Chief, who has taken the displaced Kwan with him on his way back to Reach. Kwan is understandably confused and upset, but Commander Miranda Keyes (Save Me‘s Olive Gray) holograms herself into the ship’s hold to speak with her. We later find out via Miranda’s father that the higher-ups at UNSC want Kwan dead. (In UNSC-speak, “Article 72” means quietly and discreetly terminate, much like “86” is bartender code for “We’re out of it.”)

The order to terminate Kwan reaches Master Chief, who is expected to carry out the command. But, still shaken by the artifact’s influence, he disobeys the command. A furious Parangosky has the ship’s oxygen levels dropped remotely while Halsey reluctantly matches the order by cutting off oxygen to Master Chief’s suit. The ship meanwhile continues on its course to Reach, while UNSC higher-ups attempt to predict the rogue Spartan’s next move.

Master Chief manages to restore the ship’s oxygen, prompting Parangosky to send UNSC marines to the hangar to await his arrival. As the trigger-happy soldiers train their weapons on the hangar’s mouth, Halsey pulls three Spartans aside privately and commands them to protect Master Chief at all costs.

Aboard the ship, Kwan seizes Master Chief’s gun and threatens him, but he stops her by remarking on the blaster’s ineffectiveness against his armor. He then removes his helmet and reveals his face to her. As they land and prepare to confront Parangosky’s forces, Master Chief activates the artifact, which he’d taken from Madrigal. He has a continuation of his first, strange memory before the artifact exudes an energy pulse and disables the power throughout the entire UNSC facility. Master Chief uses this unexpected distraction to escape with Kwan….

What did you think of Halo’s premiere? Did it mash your buttons?