Who is Will’s father, Lou? And why is Phil so eager to keep his identity a secret from Will?

Those pressing questions loomed over Thursday’s episode of Bel-Air as Will contemplated whether he should figure that out for himself or remain in the dark about his birth father.

The family attended Sunday Service, where Carlton performed for the first time in years. Who knew he could sing like that? Things were going well until his anxiety kicked in and he was jetting off the stage like he saw someone he owed money to.

Will suspected Carlton’s breakdown was due to drugs, which he brought up with Hilary — she had no idea about her brother’s coke habit. But in a frank conversation, Carlton maintained that it was the anxiety that made him choke and he wished he had done drugs beforehand. As Carlton beat himself up because he believed this was a self-fulfilling prophecy, Will offered emotional support to help carry the burden.

Carlton later thanked Will for being there for him and stopping him from using coke. He also declared that he was done with drugs, which raises the question of whether he can kick the habit just like that.

Meanwhile, Geoffrey — who went behind Phil’s back — found the information Will had requested about his dad. He handed over the white envelope with a warning that the contents of that package will impact the entire family. That was enough for Will to seek out advice from Uncle Phil and decide that he didn’t need that information. For Will, Uncle Phil has been more of a father than anyone, and that was enough for him. 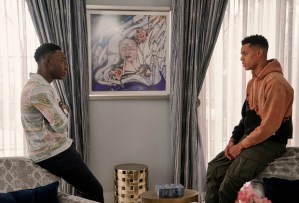 Perfect timing as Phil prepped for his big debate against Fred with Geoffrey and Steven (guest star Duane Martin). Phil didn’t take kindly to Geoffrey essentially calling him out for wanting to use Fred’s affair against him and pretending that was a difficult choice.

Elsewhere, Aunt Viv was one step closer to diving back into the art world. She took up a meeting with Helen (Daphne Maxwell Reid, who played Aunt Viv on Fresh Prince) and Janice (Vernee Watson-Johnson, who played Will’s mom Vy in the OG series) as part of the final step in her application process for a major art scholarship. The pair offered Vivian the fellowship and gave her 24 hours to contemplate the requirements, which included travel, speaking engagements and press. Between Will moving and Phil’s campaigning, Vivian was ready to turn it down. However, Janice reminded her that she cannot accept an answer right now and that she had until tomorrow to think it over.

We also learned that Lisa had been ignoring Will’s calls and had a good reason for ghosting him. Fred didn’t want her to continue seeing him, even alluding to the fact that Will has been hiding the truth about what really happened in Philly. He granted Lisa permission to see Will once last time to get a real answer from him. Later that day, Lisa took up her father’s suggestion and confronted Will about the fight that landed him in jail. Will didn’t have to say anything; the truth was written all over his face. Lisa expressed her hurt and anger with his deception, and Will explained he did it out of respect for Phil. And as Lisa forgave him, she also revealed that Fred was planning to use the information against Phil during the debate.

Phil was not happy about Geoffrey handing over that packet to Will. He confronted his house manager for going behind his back, and Geoffrey defended himself because he firmly believed Will had a right to know about his father. When Phil tried to pull rank, Geoffrey reminded Phil that he was trying to protect the family from Phil’s ambition. That’s when Phil dropped this surprise: “The only reason you sided with Lou is because you feel guilty about leaving your own boy behind,” he said. Wait, Geoffrey has a son?

Still, Geoffrey stood firm in his decision and had no regrets about sharing that information about Lou with Will. He had more to get off his chest, telling Phil how Vivian’s dream “drowned under yours,” Carlton’s dreams were just an extension of his and that Fred is flawed but a good man Phil will destroy because he’ll do whatever it takes to achieve his own goals. This stark defiance from Geoffrey meant Phil could no longer trust him. Phil then fired Geoffrey, who remained composed. Even while being dismissed, Geoffrey still looked out for Phil and suggested he take a “leave of absence” instead. A “firing” would raise too many questions.

With the debate moments away, Will and Carlton rushed to warn Phil about Fred. But Phil was busy telling judge Robertson (played by Sherman Helmsley in the OG series) off for trying to push his agenda on him. When they finally reached Phil and caught him up to speed, Phill assured both teens it was going to be OK.

In his opening statement for the debate, Phil announced he was withdrawing from the race in order to be a better husband and father — a move that hopefully ensures the press will stop looking into his family (and keep Will’s arrest under wraps).  Following through with their earlier agreement, Phil endorsed Fred before leaving the stage to hug his family. He was finally going to put them first.

That also meant making Vivian promise to take that fellowship.

What did you think of this week’s episode of Bel-Air? Do you think we’ll meet Lou this season? Drop a comment below.