Tyler Perry’s Sistas fans don’t yet know if Andi will reconcile with Gary or when Karen will finally see a doctor, but they can take comfort in the fact that the wildly popular drama will have a fifth season.

BET on Tuesday announced the Sistas renewal along with its Season 4 pickup of the prolific producer’s other drama on the basic-cable network, Tyler Perry’s The Oval.

The Season 3 finale of the latter will air tonight at 9/8c. Titled “Road Kill,” the installment will show Nancy on edge as she suspects the worst after Barry leaves home and doesn’t keep their line of communication open.

Perry produces, directs and writes both series, which this spring will commence production on their new seasons at Tyler Perry Studios in Atlanta.

Sistas follows five Black career women as they navigate life and love while leaning on one another. The dramedy is currently on hiatus after airing its Season 4 midseason finale on March 16; it will return Wednesday, June 29 at 9 pm.

The Sistas cast includes KJ Smith as Andi; Mignon as Danni; Ebony Obsidian as Karen; Novi Brown as Sabrina; and Crystal Renee Hayslett as Fatima. There is also Devale Ellis, who costars as Zac; Chido Nwokocha as Gary; Anthony Dalton II as Calvin; Brian Jordan Jr., as Maurice; Kevin A. Walton as Aaron; and Trinity Whiteside, who plays Preston. 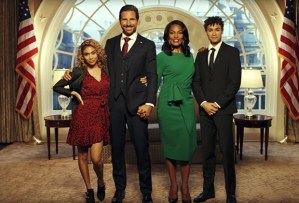 The Oval meanwhile spotlights what happens when the POTUS is nutty and histrionic and his wife and children are, too.

Are you excited that Sistas and The Oval are coming back for new seasons? Drop your thoughts in the comments.