As Snowfall fans know, Wanda became hooked on crack while working for Leon. She was touching the substance without gloves and cooking it without a mask, and her subsequent addiction soon turned a vibrant Wanda into a disheveled shell of herself.

Last season, viewers cheered as Leon checked his ex-girlfriend into a rehabilitation program and she overcame her dependency and started rebuilding her life. Now in Season 5, Wanda has gone from a cringy phone-sex job to working for Franklin as a property manager.

It was while she was briefly in between jobs that Wanda panicked and reached out to Leon to possibly sell drugs. Leon promptly turned her down and once again established that he would do anything for Wanda — except put her in harm’s way again.

“Leon is such a tough guy,” Gail Bean, who plays Wanda, tells TVLine. “He shot and killed Khadijah and Skully’s child in Season 4, and he’s been going through so much ever since. This season, he’s processing. He won’t speak on a lot of things, but he does know what he doesn’t want to do.” 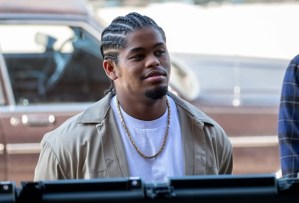 Multiple problems — including police brutality and an attempt on the lives of Leon, Franklin and members of their crime family — have popped up in Season 5 of the FX gangster drama. And Bean says things will only get more intense when Snowfall airs this Wednesday at 10/9c. This includes finding out who tried to kill them.

“It’s frustrating because [Leon] doesn’t have the answers on how to fix his problems,” Bean observes. “When it comes to Wanda, he also has his guard up because they have a similar background where their families are not supportive. There are all these things Leon wants to do, but he hasn’t had the best examples of what it looks like to be a good support system.”

Isaiah John, who costars as Leon, agrees and shares that his character is shouldering a lot of guilt for Wanda’s past addiction.

“In his mind, at the end of the day, Wanda wouldn’t have been introduced into that lifestyle if it weren’t for Leon,” John explains. “I talked to individuals who have been in similar situations like Leon and Wanda. A lot of the guys I talked to said they tried so hard to get their lovers off crack, but they were only introduced because of them. Some dudes had success getting their lovers clean, but in most cases, not. To this day, they still feel it’s their fault.”

It’s a level of realness that grounds the show, John argues.

“These were their girls, their ride-or-dies, and these men did that to them,” a slightly astonished John reveals. “That storyline is important to tell because there are people who feel this way for real.”

Bean, meanwhile, is just happy that everyone’s favorite character has continued to enjoy a redemptive arc.

“At my very first fitting for Season 5, all of the clothes were nice and clean,” Bean recollects. “I was like, ‘What’s happening?’ I hadn’t read the script yet. Being this new version of Wanda is great. I was very surprised and nervous about how the audience was going to take it. But I think everyone is still cheering for her, and in the end, Wanda just might save everyone.”

What do you think of Wanda and Leon on this season of Snowfall? Drop your thoughts in the comments.